Sen. Gonsalves says he renounced his American citizenship ahead of appointment to SVG Parliament 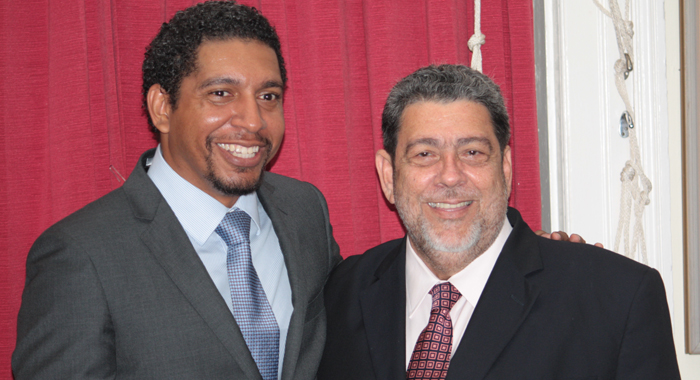 Minister of Foreign Affairs, Foreign Trade, Commerce and Information Technology, Sen. Camillo Gonsalves on Thursday issued an “open letter” in response to claims that he is constitutionally unqualified to be a senator in the Parliament of St. Vincent and the Grenadines.

Sen. Gonsalves, the U.S.-born son of Prime Minister Ralph Gonsalves, said he has always been a Vincentian, since the Constitution of St. Vincent and the Grenadines (SVG), granted him automatic citizenship at the moment of his birth.

He further said that while the fact of his birth in the United States did not disqualify him from being a senator in SVG, he renounced his American citizenship ahead of his appointment as a senator on Sept. 16, 2013.

“Nonetheless, despite the fact that my foreign birth posed no legal impediment to my appointment and service as a Senator, I took a personal and private decision to renounce my United States citizenship,” Sen. Gonsalves said.

He said that ahead of his appointment as a senator last September, he submitted the requisite formal paperwork at the United States Embassy in Barbados, conduced the necessary interview with Embassy officials, and paid the US$450 fee.

“All of this was done prior to my taking the oath of office to serve as a senator in the Parliament of Saint Vincent and the Grenadines.

“To be clear: I am not a citizen of the United States of America.

Recently on social media and on political talk shows on radio in SVG, there have been allegations that Gonsalves is not qualified to be a senator in the nation’s Parliament.

“I was loath to respond to many of the baseless and wildly erroneous claims that were circulating regarding my citizenship and allegiance to Saint Vincent and the Grenadines,” Sen. Gonsalves said in his letter.

He said he likened that claims against him to those made by “the so-called ‘birthers’ in the United States, who, despite ample legal and factual evidence to the contrary, continue to question H.E. Barack Obama’s constitutional right to serve as President of his country.”

He, however, said that some parliamentary members of the opposition New Democratic Party “have recently decided to give credence to these false claims, and have also raised questions about my eligibility to serve in my current capacity.

“It is regrettable that, almost six months after they welcomed me into the Parliament of Saint Vincent and the Grenadines without objection, some members of the Opposition have allowed themselves to be misled on this issue by fringe elements and Internet crackpots.

“It is even more unfortunate that opposition parliamentarians with extensive legal training have been so completely bamboozled by the mindless patter of the uninformed chatterati,” the senator wrote.

He said he listened “with dismay” to a radio programme on Feb. 27 in which “opposition members, with no knowledge of the facts, and precious little understanding of the applicable law, made a series of false statements that would have confused Vincentians not only about my situation, but may have had a chilling effect on other, similarly situated individuals who may have an ambition to serve their country in a similar capacity.

“In light of these recent flights of fancy by otherwise credible individuals — as opposed to the earlier rants of uninformed partisan zealots — I now feel compelled to set out the facts and the law related to my citizenship and allegiance,” the senator wrote.

Always a citizen of SVG

Citing Section 92 of the Constitution of St. Vincent and the Grenadines, Sen. Gonsalves said that while he was born in Philadelphia on June 12, 1972 to his Vincentian father, and Jamaican mother, Sonia Gonsalves, “I became a Vincentian citizen — automatically — from the moment of my birth.”

Section 72 of the Vincentian Constitution, which speaks to persons born outside St. Vincent on or after 27th October 1979, says:

“It is important to note that persons born anywhere in the world to a Vincentian parent become citizens automatically and as of right. There is no registration process or application for such citizenship. I became a citizen of Saint Vincent and the Grenadines ‘at the date of [my] birth,” Sen. Gonsalves said.

He further said that he lived in SVG, attended primary and secondary school in SVG, worked and paid taxes in SVG, and purchased property in SVG. “My Vincentian citizenship cannot be questioned.”

Qualified to be a Senator in SVG

Sen. Gonsalves further said that his birth in the United States does not disqualify him from being a senator in SVG.

He cited Section 25 of the Constitution, which outlines the ‘Qualifications for representatives and Senators”.

(1) Subject to the provisions of section 26 of this Constitution, a person shall be qualified to be elected as a representative if, and shall not be so qualified unless, he-

a. is a Commonwealth citizen of the age of twenty-one years or upwards

c. is able to speak and, unless incapacitated by blindness or the physical cause, to read the English language with a  degree of proficiency sufficient to enable him to take an active part in the proceedings of the House.

(2) Subject to the provisions of section 26 of this Constitution, a person shall be qualified to be elected or appointed as a Senator if, and shall not be so qualified unless, he is a Commonwealth citizen of the age of twenty-one years or upwards.

“Some of the ‘birthers,’ in their ignorance of the applicable law, have sought to question the issue of the length of my residence or domicile in Saint Vincent and the Grenadines prior to my Senatorial appointment. However, thankfully, mainstream opposition members have steered clear of this particular red herring.

“I hope that, beyond the fringe elements, all involved will be satisfied that I am old enough, free of the proscribed incapacities, and sufficiently literate to qualify for Senatorial appointment in Saint Vincent and the Grenadines,” Sen. Gonsalves said.

He further mentioned the constitutional “Disqualifications for Representatives and Senators”, as outlined in Section 26 of the COnsitution, the pertinent part of which states:

26. (1) No person shall be qualified to be elected or appointed as a Representative or Senator (hereinafter in this section referred to as a member) if he-

a. is by virtue of his own act, under any acknowledgment of allegiance, obedience or adherence to a foreign power or state,

Sen. Gonsalves said tis is a common provision in Commonwealth constitutions, both in the Caribbean and beyond.

“It is settled law that the incident of an individual’s birth in a foreign country is not ‘his own act’ sufficient to disqualify him from being a representative or senator. Since a child cannot chose where he or she is born, the constitutional caveat of ‘by virtue of his own act’ seeks to exempt such individuals from disqualification.

“Section 26(1)(a) of the Vincentian Constitution, like all such provisions in other constitutions, is designed to disqualify those persons who voluntarily swear an oath of allegiance to a foreign power, as is the case of those adults who acquire citizenship by naturalization.

“Further, recent case law is also clear that the possession of passports, drivers licenses, and other ‘ordinary incidents of citizenship’ by natural-born citizens does not disqualify them from Senatorial appointment or election.

The intention of the words is not to ensure that those legislators who may happen to hold other citizenship by birth, do not enjoy any of the rights and privileges which are the ordinary incidents of such citizenship.

The Chief Justice also opined that the Constitution and legislature of the Cayman Islands:

must now be taken as wishing to reflect the equality and freedom of all Caymanians including those born in other countries, to participate in the fullest expression of political life even when this is balanced against the needs of the society to have competent and loyal representatives in its Legislative Assembly.

“I continue to marvel at the ability of those who, by virtue of hyper-partisanship or simple laziness, take to the Internet to make pronouncements that are so easily refuted by preexisting, publicly-available, online information.

“While it may be too much to ask the fringe elements and ‘birthers’ to read all 57 pages of Chief Justice Smellie’s cogent analysis, it is my sincere hope that the legal luminaries in the opposition New Democratic Party will take the time to absorb its implications before making further definitive pronouncements — particularly via the media — on the basis of uninformed blogs and text messages.

“I am sure that, having read that judgment and the cases to which it refers, even the most partisan lawyer will concede that the fact of my birth in the United States does not disqualify me in any way from serving in my current Senatorial capacity,” Sen. Gonsalves said.

12 replies on “Sen. Gonsalves says he renounced his American citizenship ahead of appointment to SVG Parliament”