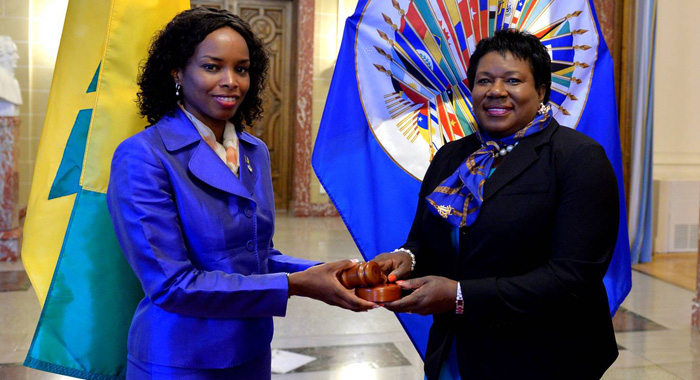 WASHINGTON, DC — St. Vincent and the Grenadines (SVG) on Wednesday assumed chairmanship of the Permanent Council at the Organisation of American States.

The Permanent Council, comprised of the Permanent Representatives (ambassadors) from the 34 member states is one of the two main political bodies of the Organisation.

At the handing over ceremony at the OAS headquarters in Washington DC, Permanent Representative of SVG, Ambassador La Celia A. Prince received the chairperson’s gavel from outgoing chair of the Council, Ambassador Sonia Johnny of St. Lucia.

In handing over the gavel, Johnny indicated that she has known Prince for a very long time and expressed confidence in Prince’s ability to meet the demands of the chairmanship.

Upon accepting the gavel and assuming the role, Prince, in her address before the Secretary General, Assistant Secretary General and other Permanent Representatives to the Organisation, said it is a tremendous honour for SVG to be entrusted with the responsibility of chairmanship of the Council.

“For St. Vincent and the Grenadines assuming this chairmanship is a symbol of our place in this hemisphere and an acknowledgement that we too have a role to play in advancing the objectives and purposes of this Organisation,” she said.

“It is one of the great things about this Organisation, that no matter the geographical size or financial wealth of a country, each Member States has an equal opportunity to be at the forefront of steering the Organisaton in the advancement of its work.”

In her acceptance remarks, Prince committed herself and the delegation of SVG to working determinedly in ensuring that the mandate entrusted to her country will be fulfilled for the betterment of the Organisation, while balancing the interests and needs of all Member States.

She also briefly outlined some of the priority areas on which she intends to focus the Permanent Council’s attention during her chairmanship and congratulated the sterling leadership of her predecessor, whose success she said she hopes to emulate.

Prince will be at the helm of the Permanent Council for three months, after which the chairmanship will be passed to Suriname.

The chairmanship of the Permanent Council rotates every quarter, passing to each country by name in alphabetical order.

At this time, CARICOM countries have a tremendous and unique opportunity to influence the focus of the OAS agenda since the rotation by alphabetical order has created a 15-month consecutive CARICOM leadership at the Organisation through chairmanships from St. Kitts and Nevis, St. Lucia, St. Vincent and the Grenadines, Suriname and Trinidad and Tobago.

The Permanent Council will also be chaired for an unprecedented 12 consecutive months by female envoys, notably from the CARICOM region.