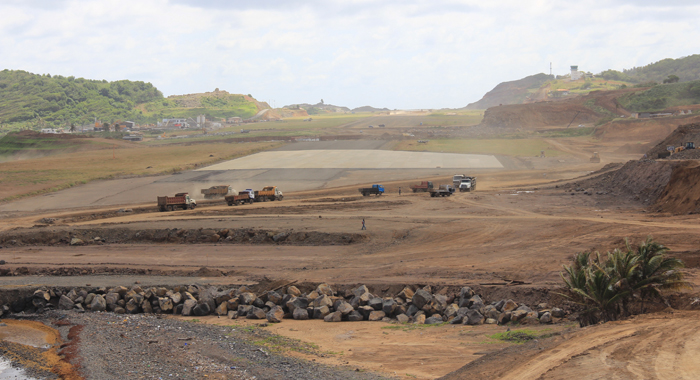 The Vincentian private sector did not expect the government’s projection that the nation’s first international airport would have been “substantially complete” by December 2014 to materialise.

The EC$729 million Argyle International Airport has been under construction since 2008 and has missed several completion deadlines, including 2011, 2012, 2013, and the most recent — December 2014.

In the Budget Address late January, Prime Minister Ralph Gonsalves said the airport “will be completed this year and ready for operation”. He said the paving of the runway will be complete in June 2015.

Speaking Thursday at a private sector overview of the 2014 Budget organised by the Chamber of Industry and Commerce and sponsored by accounting firm KPMG, accountant Brian Glasgow of KPMG, said “it’s in everybody’s interest to hope and expect that the project is completed reasonably within schedule”.

“And I think there isn’t anyone in this room who really expected that the airport would have been completed at the end of 2014,” he told the gathering of private sector representatives and media workers.

“On the other hand, it is a project that is so critical to the future of this country that it is in everyone’s interest to hope that it can be completed within a very reasonable time,” Glasgow said.

Asked if he was satisfied that the private sector was positioning itself to take advantage of the opportunities that the government says will come when the airport becomes operational, Glasgow said that the local private sector “traditionally has been a very cautious”.

“The private sector in St. Vincent and the Grenadines traditionally would not commit themselves to making an investment unless they are one hundred per cent confident that there will be a definite start date,” he said.

“As we get closer to a definite start date, as the private sector sees more progress, as the paving continues, the river crossing and so on, and the private sector is satisfied that within a reasonably short space of time the airport will be completed and operational, I am confident that we would see more interested response from the private sector regarding investment in the superstructure which is necessary to support the international airport,” he said.

Accountant Reuben M. John, a partner at KPMG, in his presentation, noted that EC$74.7 million, 25.2 per cent of this year’s capital budget will go to the airport this year.

“And you will appreciate that this project, once completed, will bring significant benefit to the state,” he said, noting that the International Monetary Fund said late last year that the economy could grow by up to 3 per cent in 2016 once the airport becomes operational in 2015

John said that the airport will create opportunities for investment in tourism, transportation and other support infrastructure.

He, however, pointed out that during the initial stages of the operation of the airport the revenue generated “is hardly likely to be able to cover the operating cost”.

“So, that is something that the policy makers would have to address, and I am certain that it will be addressed from a long-term standpoint. An airport investment is a long-term project. It is not a project that you expect to break even in the short- or medium-term.

“… There is s significant capital outlay upfront, and it takes a longer time — the higher the capital investment initially, the longer it will take to recover the cost of the capital. It is natural in any business venture and the airport is like that,” John said.

“And, as a nation, we have to work to maximize the opportunities for economic growth from this project, and be supportive, as far as possible.”

‘When will the airport really be ready?’

Speaking during the Budget Debate in January, Leader of the Opposition Arnhim Eustace again expressed doubt that the airport will begin operating this year.

“Mr. Speaker, when will the airport really be ready? That, for me, is a fundamental question. Why are we making projection after projection about arrivals and these sorts of things? We have not completed negotiations with any airline at all. Why are we making these statements? Why are we giving our people the hope of employment as the airport will contribute to other sectors of the economy and we are not ready? Why are we doing it? I understand the politics. Is that why we are going it? Fooling people?” Eustace told lawmakers.

“There is no way you are going to open this airport in 2015, and you know it. … Mr. Speaker, I think we need to come clean with the people of this country on when we are ready for this airport,” Eustace told Parliament.

“Mr. Prime Minister, I would like when you do your wrap-up — if you tell me a specific date seriously for airport opening, I would accept that.

“You know, as Prime Minister, you are there all the time, you know the circumstances of the financing, and you are not blind. You can see the practical state of the airport. You know that in six months time it ain’t finish,” Eustace said.