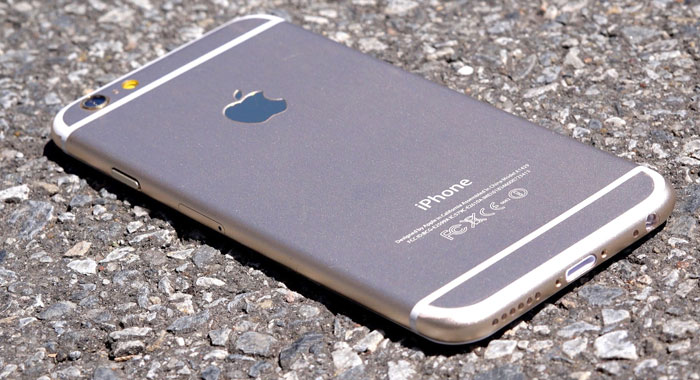 The accused man has maintained that he found the phone at Heritage Square. (Internet photo)

A man who spent two days in jail after the owner of a phone he found failed to collect it as they had arranged, saw the theft charge against him withdrawn on Friday, Jan. 5, 2018.

Lennox Tommy of Edinboro, originally of Georgetown, is now wondering who is going to give him back the EC$800 he spent in legal fees to clear his name.

The theft charge was brought against the man although he told the owner of the phone — a Canadian — his name and address, and arranged for the phone to be handed over in Kingstown.

And, Tommy’s lawyer, Michael Wyllie, believes that only a few lawsuits for false imprisonment would deter police in St. Vincent and the Grenadines (SVG) from making these types of arrests and bring charges in those circumstances.

Tommy was charged in late December with theft of the phone — an iPhone.

When he was arraigned before Bertie Pompey at the Kingstown Magistrate’s Court, Tommy pleaded not guilty and immediately told the court, “I did not steal the phone. I found the phone.”

He was granted bail and the matter was adjourned to January.

However, when the case came up for hearing last Friday, Jan. 5, 2018, prosecutor Corlene Samuel told the court that the Crown was withdrawing the charge.

The magistrate then told the accused man that he was free to go.

Tommy’s lawyer, Wyllie, rose and asked the court why the charged had been withdrawn.

The prosecutor said that the Crown did not have enough evidence to substantiate the charge.

Wyllie told the court that this is an issue that he has with police in SVG.

“He is a Good Samaritan that found a phone, got in touch with the person to collect the phone. I have had this situation over and over where the police don’t know the basic elements of theft. They can’t even get past appropriation.

“Over and over again, locking up a man, putting him in jail for two days. This has to stop. You are taking way people’s human rights. That happens to be my background, so when I hear about these things, I get really passionate about this. If this was in the United States, this man would have been rich suing the police for false imprisonment,” said Wyllie, who has practiced in the United Sates.

“You would have had a lot of rich persons in St. Vincent,” said lawyer Grant Connell, who was sitting at the bar table.

“This is outrageous,” Wyllie told the court.

After the proceedings, Tommy told iWitness News that he found the phone at Heritage Square sometime after midnight on Dec. 17 and took it home, keeping it in anticipation that the owner would call.

He said that the owner never called until sometime between 5 and 6 p.m. that day.

Tommy told iWitness News that he answered the phone and spoke to the people about how they would get the phone.

He said he had gone to Georgetown to work and gave the owner of the phone his name and they arranged to hand over the phone in Kingstown the following Monday.

He said that on the Monday, the owner of the phone did not call, but went to the police, leading to his being arrested.

“I did not steal anybody phone,” Tommy told iWitness News.

“So, mostly likely, when you find people’s phone now, it either you throw it away or do something or dismantle it. Because if you find a phone and are being honest to give back the person, and tell them your name and everything, they are not supposed to go the station and say somebody stole their phone. It’s really ridiculous,” Tommy said.

He told iWitness News that he paid EC$800 in legal fees to clear his name.

Meanwhile, Wyllie told iWitness News that his client should never have been charged.

The lawyer said he returned to SVG about two years ago after studied, living and practicing law in 11 jurisdictions for 37 years.

“And since I have been here, I have had several cases where the police do not know the basic elements of a crime and what evidence they need to put forward to prove a charge,” Wyllie told iWitness News.

“If someone steals a phone, would they answer it and give the person their name? He ended up two nights in jail. Like I said [to the court], if this were in the United States or other jurisdictions I’ve been to, a lot of Vincentians would be rich.”

He said the thing that the police were probably going on was the fact that two days had passed after Tommy found the phone.

Wyllie said that while many people in other jurisdictions would sue for such matters, in SVG, “I am sure you have been around the court long enough to know that is not done, but I intend to do some more of that here … because somebody needs to set an example to the police that you cannot be going around arresting people on not even tenuous evidence, no evidence at all. This is outrageous.”

He noted that the man had to pay legal fees and said it is about time that, on matters of these kinds, the prosecution be made to pay for the defendant’s costs.