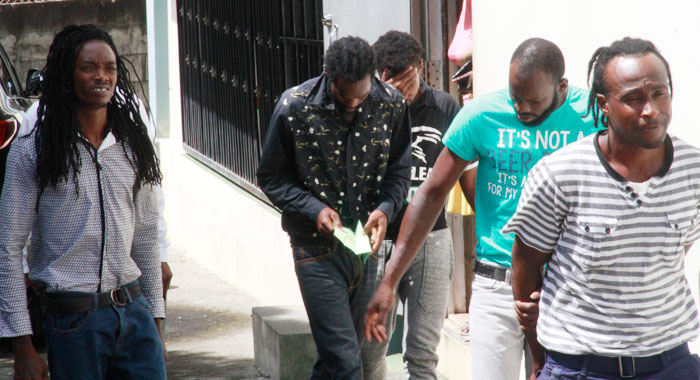 The accused men, from left, Jeronza Thomas, Junior Charles, Kazim Alexander, Dane Daniel, and Timron Padmore, on their way to court in May 2018. (iWN photo)

Five men were brought before the Kingstown Magistrate’s Court on Thursday charged with wounding and other offences in connection with the beating of a widower at his wife’s funeral in Chauncey on Sunday.

A video circulated via social media shows Paul Stephens being beaten viciously as he and other mourners paid their final respects to his wife, Je-Tonnia Thomas-Stephens at the Chauncey Cemetery.

Thomas-Stephens, 32, was found dead on May 10 at the Kearton, Barrouallie home she shared with her husband and their 4-month-old child.

But on the day that Thomas-Stephens was found dead, a photo was circulated on social media of a woman purporting to be the deceased with her throat slit, but of which police later said was not Thomas-Stephens.

When he and his co-accused appeared before Senior Magistrate Rickie Burnett, Chauncey resident Kazim “Meds” Alexander, 20, pleaded guilty to a charge that on Sunday, without lawful excuse in a public place, to wit the Chauncey Cemetery, he had in his possession an offensive weapon, to wit “an 8 inch concrete block”.

He also pleaded guilty to a charge of possession of an offensive weapon, “to wit a piece of wood”.

Timron “Homey” Padmore, 38, of Rillan Hill, pleaded not guilty to possession of an offensive weapon, to wit a stone.

Dane Daniel, 35, of Chauncey, initially pleaded not guilty to a charge of possession of an offensive weapon, to wit a stone, but later told the court that he wanted to change his plea to guilty.

Junior “Trunkie” Charles, of Chauncey, who turns 29 on Friday, pleaded guilty to possession of an offensive weapon, to wit a stone.

Jeronza Thomas pleaded not guilty to a charge of possession of an offensive weapon, to wit, a stone.

The men were also jointly charged that on Sunday, also at Chauncey, they did cause a disturbance to an assembly lawfully engaged in the performance of religious ceremony, to wit “the funeral service of Je-Tonnia Thomas of Chauncey”.

Alexander, Charles, and Padmore pleaded not guilty to the charge, while Daniel and Thomas pleaded guilty.

The men were further charged that on Sunday at Chauncey, they unlawfully and maliciously wounded Paul Stephens of Barrouallie.

Alexander and Thomas pleaded guilty to this charge while the three other co-accused pleaded not guilty.

Prosecutor Corlene Samuel told the court that the Crown was accepting the guilty pleas but would be proceeding against the accused men on all of the charges for which they pleaded not guilty.

She said that the prosecution was not objecting to the men’s bail but asked that the court order Daniel to surrender his travel documents.

Samuel told the court that Daniel is a seasonal farm worker in Canada and was expected to travel soon.

Daniel confirmed that he is so employed and, after some back and forth, told the court that he usually travels around June or July.

The prosecutor further asked the court to order the accused men not to have any contact with Mr. Stephens.

The senior magistrate set bail for each accused in the sum of EC$5,000 with one surety.

They were ordered to have no contact with the virtual complainant and Daniel was further ordered to surrender his travel documents.

The next hearing is scheduled for July 30.

5 replies on “Men charged with mob attack at funeral”