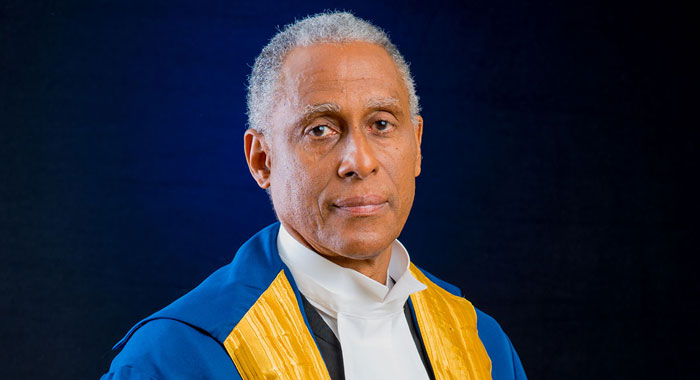 A ceremonial sitting of the Caribbean Court of Justice (CCJ) in St. Vincent and the Grenadines (SVG) will be the final in a series of events commemorating the Honourable Justice Adrian Saunders’ elevation to the office of CCJ President.

The event will be held at the House of Assembly in Kingstown at 1 p.m., on Friday, in Justice Saunders’ home country.

This event will be broadcast live on the internet on the CCJ’s website at ccj.org.

The CCJ President stated, “It is with much anticipation that I return to my home country to preside at this first sitting of the CCJ in St Vincent and the Grenadines. While I am a son of St. Vincent and the Grenadines, I have become a true Caribbean man, living in so many of our nations and working for over two decades in service to the region. However, it is always a distinct pleasure to be recognised in the place that is your first home”.

Judge of the CCJ, the Honourable Justice David Hayton will moderate the event, as well as, make his own remarks. Prime Minister of SVG, Ralph Gonsalves will head the list of speakers who will pay tribute to Justice Saunders.

Other speakers include the Justice Dame Janice Pereira, Chief Justice, The Eastern Caribbean Supreme Court; the Jaundy Martin, attorney general of SVG; the Jomo Thomas, speaker of the SVG House of Assembly, and Reginald Armour, SC, chairman of the Council of Legal Education, will make his presentation by video.

The CCJ President response will conclude the ceremonial sitting.

Additional information on the event, including the link to the live broadcast, is available on the Court’s website at www.ccj.org.

Justice Saunders holds a Bachelor of Laws degree from the University of the West Indies (Cave Hill) in 1975 and a Legal Education Certificate from the Hugh Wooding Law School in Trinidad and TTobago in1977. He began his legal career as a barrister and solicitor in private practice in his home country.

In 1990, he established the firm of Saunders & Huggins before being invited to join the Eastern Caribbean Supreme Court (ECSC) High Court Bench in 1996.

On May 1st 2003, Justice Saunders was appointed to the ECSC’s Court of Appeal and served as acting Chief Justice between 2004 and 2005.

While at the ECSC, Justice Saunders developed a passion for and was deeply involved in various judicial reform efforts. These included the introduction of court-connected mediation in the Eastern Caribbean and the development of that court’s first judicial code of ethics.

In 2005, Justice Saunders was among the first cohort of judges to join the Caribbean Court of Justice (CCJ) bench. Justice Saunders has contributed greatly to regional judicial outreach and judicial education efforts. He is a founding member of the Caribbean Association of Judicial Officers (CAJO) and has served as the organisation’s Chairman since its inception in 2009.

Due to his active engagement in advancing judicial integrity, Justice Saunders has recently been appointed to serve on the Advisory Board of the Global

Judicial Integrity Network by the United Nations Office on Drugs and Crime’s (UNODC) Global Programme for the Implementation of the Doha Declaration.

Justice Saunders’ interests also extend to the area of court administration where he has adopted an active role in the CCJ’s public education and other strategic projects. He led the development of the Court’s first Strategic Plan in 2012 and currently chairs the ongoing project to develop and execute the Strategic Plan for 2018-2023.

Justice Saunders has written many legal articles and publications and is a Consulting Editor of The Caribbean Civil Court Practice and a co-author of Fundamentals of Caribbean Constitutional Law.

He serves as Chairman of the Caribbean Association of Judicial Officers which, in collaboration with UN Women, played a leading role in developing and promoting the adoption of Gender Sensitive Protocols for Judicial Officers for various Caribbean judiciaries. He also lectures part-time at the UWI, St. Augustine Faculty of Law on Constitutional Law.

The Justice Saunders is married to Marilyn née Joslyn and the couple has two sons, Yuri and Yanek