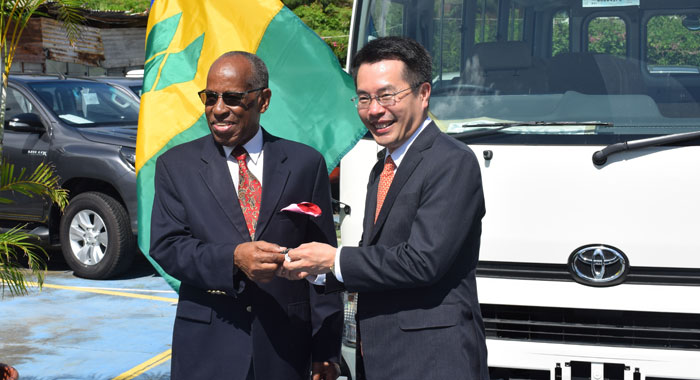 Sung Moon-up, ambassador of the Republic of Korea, presented his letters of credence to the Governor General Sir Frederick Ballantyne at Government House on Tuesday.

The ambassador, who is resident in Trinidad and Tobago, is now accredited to SVG.

During his meeting with Straker, both sides reaffirmed their countries’ commitment to providing mutual support in enhancing the relationship on various bilateral and multilateral issues.

On Tuesday afternoon, a ceremony was held at Star Garage at Murray’s Road for the handover of a 30-seater bus from Korea to SVG.

It is the latest generation of its kind to land in St. Vincent and the Grenadines and has diverse capabilities including anti-lock braking system (ABS) and vehicle stability control (VSC). The bus is diesel efficient and its design is especially suited to the terrain of SVG.

At the ceremony, Moon-up handed over the keys to Sir Louis, who entrusted them to the Ministry of Transport and Works, represented by Permanent Secretary Hudson Nedd.

Straker charged Nedd to ensure that the bus is beneficial to Vincentian students and to do all that is possible to ensure its care, optimal use, and longevity.

Moon-up spoke of the importance of the bilateral relationship between South Korea and SVG and emphasized his country’s willingness to facilitate the education of the youth of SVG.

Straker, in his response, highlighted the cordial relationship that has developed between both countries since the establishment of diplomatic ties in 1979.

Since then, South Korea has been a great benefactor to SVG in various sectors, including education and health as well as the offering of technical assistance.

The handing over ceremony was witnessed by South Korean delegation, staff of Star Garage and various officials from the Ministry of Foreign Affairs, Trade and Commerce and the Ministry of Transport, Works, Urban Development and Local Government.