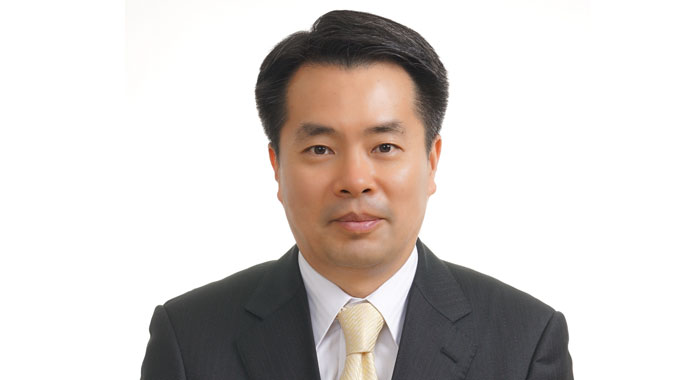 Sung Moonu, Korean Ambassador to St. Vincent and the Grenadines.

Article by Ambassador Sung MoonuKorean Ambassador to St. Vincent and the Grenadines on the occasion of the 40th anniversary of diplomatic relations between Republic of Korea and SVG

This year marks the 40thanniversary of diplomatic relations between the Republic of Korea (ROK) and St. Vincent and the Grenadines (SVG). As the Ambassador of ROK to SVG, on behalf of the people of Korea, I wish to convey greetings and congratulate the people of SVG on this momentous occasion.

ROK was one of the first countries that SVG established diplomatic relations with immediately after achieving independence on Oct. 27, 1979. The Government of Korea promptly sent a special envoy to join the independence celebration and again in the following year another special envoy to further forge a closer friendship. For SVG, Robert Milton Cato, the first prime minister of SVG paid a historic visit to Korea in August 1981, two years after establishing diplomatic relations. Since then, many high-level government officials have visited one another.

In more recent years, through the “High-level Forum on Korea-Caribbean Partnership”, an annual flagship channel for idea exchanges and cooperation, various ministers, including the Honorable Louis Straker, the Minister of Foreign Affairs who joined the 8th forum last year, have visited Korea to discuss pressing issues such as security, climate change, energy and food production. The 9thforum is expected to take place in later this year in Korea and I very much look forward to a continuous interest and participation from SVG.

Korea and SVG have also been good partners in the area of development. Korea, a country that emerged from the scourge of the war during 1950-1953, is often referred to as a successful case of transforming from an aid recipient to a donor. There is a little doubt that education has played a pivotal role in the process of economic development of ROK for the past decades.

The Korean government, together with the Korean International Development Agency (KOICA), has been actively collaborating with countries around the globe to share its development experience as well as its technical knowledge and resources. Between 1991 and 2017, ROK and SVG have cooperated in the areas of education, poverty reduction, health care to name a few. Also, many government officials have benefited from KOICA’s capacity building training programmes in numerous fields including e-governance, creative education, use of ICT on meteorological work, and audit management.

I am pleased to inform the people of SVG that this year the Korean Government is contributing US$120,000 to the Zero Hunger Trust Fund’s “Adapt a Classroom Initiative”. The contribution will be used to source computers, books and other learning materials for school children in rural areas. It is my sincere hope that such traditions of cooperation for the betterment and well-being of the people of our two countries will continue in the years to come.

In the multilateral arenas, ROK and SVG have been developing a strong partnership by rendering mutual support on various issues from economics, human rights, climate change and peace. Many challenges facing the world from environmental issues to terrorism are borderless in nature and thus require concerted efforts among all nations. In this respect, I commend the successful leadership, rendered by St. Vincent and the Grenadines as it assumes presidency of the UN Economic and Social Council (ECOSOC) in facilitating global social and economic progress. I look forward to continuing and increasing collaboration between the Government of ROK and SVG on many global agendas.

Forty years of diplomatic relations between our countries is an important milestone that offers an opportunity to reflect on the journey we travelled together and to consider new ideas and initiatives to strengthen, enrich and deepen our relations. With shared beliefs and values in democracy, peace and freedom as a foundation, I am certain that our two countries will continue to enjoy a steadfast friendship and expanded cooperation in the years to come. I wish the people of SVG happiness and prosperity.