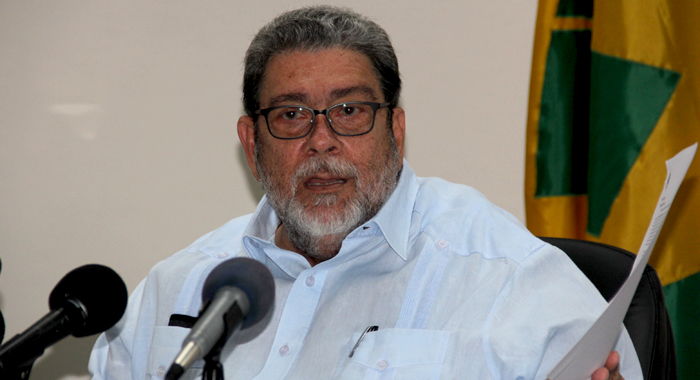 A group lobbying for a reduction in taxes and fees on intra-regional Caribbean travel has written to Prime Minister Ralph Gonsalves on behalf of 20,000 persons who have “come together in opposition to the current cost of intra-regional travel and governments’ role in escalating airfares”.

Dalano R. DaSouza, spokesperson for the group “Citizens Against High Intra-Regional Caribbean Travel Taxes” said in a press statement that over the past two weeks, packages containing copies of the petition bearing over 20,000 signatures were dispatched to the offices of the CARICOM Heads of Government and the Secretariat in Guyana.

Also included in the packages, was a letter to each head of government, “cogently outlining the case for dialogue on the vexing issue of high intra-regional Caribbean travel taxes and fees,” the press release said.

DaSouza said that to date, only the offices of the President of Guyana, David Granger and Keith Mitchell, prime minister of Grenada have acknowledged receipt of the communication.

“Accordingly, The Citizens Against High Intra-Regional Caribbean Travel Taxes is calling on the other CARICOM Heads of Government to respond to the petition submitted to their offices,” DaSouza said.

“By signing our petition, the people of the region are collectively asking to be heard on the important issue of intra-regional Caribbean travel taxes. We hope that our leaders see it fit to engage with their constituents on this important matter,”
DaSouza said in the press release.

In a Nov. 7 letter to Prime Minister of St. Vincent and the Grenadines Ralph Gonsalves, DaSouza, said that the issue of taxes, fees and charges (TFCs) in air transport has been a source of controversy globally, not least in the Caribbean.

He said that the Caribbean is a unique geographic space heavily dependent on air transportation to support the tourism industry whose contribution to the gross domestic product (GDP) of CARICOM member States is significant and for some unparalleled.

“In short, tourism is a critical component of the region’s strategic development plan.

However, the increasing cost of regional travel threatens to stymie our progress,” DaSouza wrote to Gonsalves.

He said that high and increasing TFCs have contributed to the decline in intra-regional travel in recent years.

“A 2018 study by the Caribbean Development Bank (CDB) on regional air transportation found that intraregional travel’s share of total Caribbean travel declined from 15% to 9% between 2012 and 2017.”

At the same time, travel from the Caribbean to extra-regional destinations increased by 6%, DaSouza said, adding that despite the slight rebound in intra-regional travel during 2018 reported by Caribbean Tourism Organisation (CTO), the cost of travel in the region remains a significant impediment to connectivity and growth.

The letter said that a 2007 study by InterVISTAS2 Consulting commissioned by the International Air Transport Association (IATA) conducted an extensive literature review of publications and research spanning 25 years and concluded with overwhelming certainty that higher airfares result in reduced passenger traffic demand.

“In the Caribbean, this issue of cost is exacerbated by the TFCs which, when added to the basic fares of carriers serve to make overall ticket prices devastatingly expensive for passengers. Analysis in the aforementioned CDB study revealed that on average, TFCs added 54% (40% from taxes and 14% from charges) to the cost of a LIAT one-way ticket in 2016. TFCs constitute similar proportions of fares for Caribbean Airlines (CAL) and other regional airlines,” DaSouza said in his letter to Gonsalves.

He pointed to the example of a recent CAL promotion to mark its inaugural direct flight from Jamaica to Barbados, which advertised a fare of US$100 round trip.

“However, when TFCs were added to this fare, the total cost of travel increased by US$154 to US$$254. In this case, TFCs amounted to more than a 150% increase in base fare.”

The letter included a breakdown of the different taxes imposed by CARICOM governments compiled from airline websites.

In the case of SVG, the data shows that air passengers have to pay an airport charge of US$ 40.00 and 5% on their fare when Argyle International Airport is the airport of origin.

But in other jurisdictions, air passengers pay even more in taxes, as is the case in St. Lucia, for example.

DaSouza said in his letter that there is no denying that airports are expensive.

“Consequently, there is almost an expectation that nations implement measures to extract revenue from passengers who utilise airports across the region to contribute not only to their operation, but also to fund aspects of government budgets.”

He said that for his group, the questions are how much TFCs can authorities impose on the traveller before negative overall outcomes begin to accrue.

“Specifically, how much TFCs can CARICOM Governments extract from intra-regional travellers before the region begins to be negatively impacted by the lower passenger volumes?” he said.

DaSouza said his group believes that the region is at “a critical juncture, where over-taxation while meeting airport operational costs is compromising regional development and economic integration for the worse.”

He said that the TFC regime applied to travel originating from and destined for outside of CARICOM is not the focus.

“We are not asking governments to disrupt this income stream. Instead, our efforts are concentrated on the lowering of TFCs on travel between CARICOM states…

“Rather, what we espouse is based on principles enshrined in the Revised Treaty of Chaguaramas signed by regional leaders optimistic about the manifestation of regional advancement through genuine functional cooperation. Principles of collective responsibility and shared destiny, principles of reduced insularity and myopia built on the realisation that by depending more on each other, we can depend less on non-CARICOM states for our social and economic progress.”

He said that numerous studies have used price elasticity of demand (PED) which measures the responsiveness of demand to changes in price have predicted that if governments were to reduce TFCs, intraregional Caribbean travel would increase significantly.

Amsterdam Economics, in their study “Economic benefits of reducing aviation taxes in Latin America and the Caribbean”, concluded that removing aviation taxes and fees would drive efficiency and connectivity growth to the benefit of both the consumer and the wider economy, DaSouza said.

Moreover, CDB analysis suggests that there will be short run and (larger) long run boosts to the GDP of countries that reduce TFCs. The higher the magnitude of the PED, the greater the increase in GDP, and the more likely there will be a positive net financial impact, where additional tax revenue generated by increasing economic activity would rival TFC revenue foregone.

“In other words, the increase in travel will likely see governments collect other tax revenue similar to the amount lost by reducing TFCs. This would manifest in the form of revenue increases from taxes already in existence in the economy over time (e.g. Sales Tax/VAT),” Da Souza said.

“Instead, CARICOM Governments have effectively turned regional airlines into major tax collectors and in doing so pushed the cost of travel beyond the reach of many Caribbean citizens.

“We therefore call on CARICOM governments to re-evaluate the current TFC regime on intraregional travel. Over-taxing regional travel is counter-productive to regional connectivity and the growth and productivity of our economies,” DaSouza told Gonsalves.