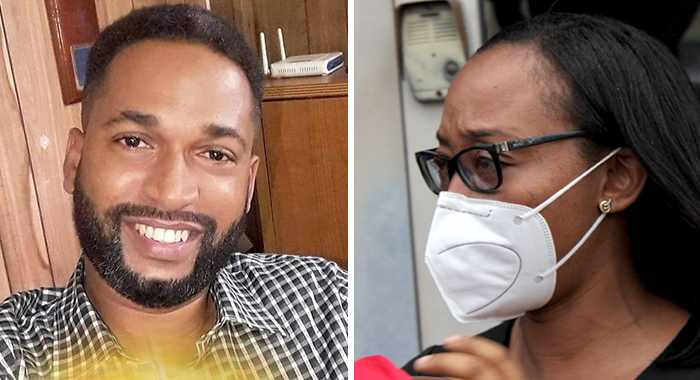 The couple whose public marriage proposal after their Community College graduation in 2004 made national headlines was in court this week, with the woman accusing her now ex-husband of breaching a court order by sending her “hateful” text messages.

However, at the close of her case, the prosecutor, acting Corporal of Police Corlene Samuel admitted that the Crown had failed to make out a case against Adrian Wright, the defendant.

The New Montrose man was tried on a charge that on Sept. 9, he disobeyed a protection order in respect of his ex-wife, Shelly-ann Wright, of Glen.

During the trial, Ms Wright admitted that she did not hand over to police the responses she had sent to ex-husband’s text messages and that she had not given to investigators all of the text messages that her ex-husband sent her.

In her evidence in chief, Ms Wright told the court that she and her ex-husband do not get along well and were separated in December 2017.

She said that in 2018, she had to go to the Family Court to obtain a protection order as Mr. Wright had “attacked” her at their son’s pre-school graduation.

Ms Wright obtained the order, which said that by consent Mr. Wright agreed not to harass her or frequent her residence.

She said that the order included one other element, which she could not recall.

As it relates to their son, Mr. and Ms Wright communicate via SMS or she would type letters and put them in the child’s bag.

She said that because the child had to go to his father’s and the timeframe was short, she could not do anything and informed Mr. Wright, via text message, about the complaint.

Sometime after 8 p.m. that day, the child’s teacher passed on some information that was important regarding the child’s reading assessment, the mother told the court.

She said she sent another text message to Mr. Wright to inform him about what the teacher had said.

“And I was very respectful in my text message,” Ms Wright told the court.

She said she woke up the following morning to see about 14 text messages from Mr. Wright.

“I was very troubled when I woke up that morning to those text messages. Generally, what troubled me was the fact that he said there would be no peace between us, as we are getting divorced, until we are on our deathbeds.”

She said that her ex-husband further stated that she should remember that their son is her salvation.

“Also, that he would never accept the divorce and he hopes I die a horrible death and that I burn in hell.”

Ms Wright said that she responded to her ex-husband saying she could not understand how he could send “14 hateful text messages, including God in some of them, and also he often complains about not having credit to communicate in relation to our son.

“I told him he has to know what he is doing.”

The complainant said she sent one text message in response “and put that on the back burner because I had pressing things to do”.

Ms Wright eventually went to the Criminal Investigation Department and made a complaint, gave a statement and handed over to the police copies of the protection order, the decree nisi, and “copies of most of the text messages”.

She told the court that when she read the text messages she was “very troubled and disturbed” because she knew she had not done anything “to aggravate that response” from the defendant.

In his cross examination, defence counsel Ronald “Ronnie” Marks asked Ms Wright whether the protection order was by consent.

She said that was the case.

The complainant also confirmed that Mr. Wright had proposed to her in a church at her graduation.

She said that Mr. Wright is a religious person “to a point”. He makes constant references to God and his belief, she told the court.

Mr. Wright was reluctant to proceed with the divorce, his ex-wife said.

“Because he thought it is a sin. He said the two of you would burn in hell for defying God and breaking that bond,” Marks said.

Ms Wright said that her ex-husband told her she would burn in hell.

“Now we are divorced, there will be no peace between us until the day either of us are on our deathbed,” Marks read from the text messages, emphasising “us”.

However, Ms Wright said that was not the part of the text messages in which her ex-husband had made the comments.

The complainant said that Mr. Wright basically said that divorce is wrong in the sight of God and that their son is her salvation and I should be mindful of that.

“That is suggestive of a threat,” Ms Wright said.

“Your salvation to God is a threat?” the lawyer said.

However, Ms Wright said that the message meant that “my son existing is a saving grace to me”.

But the lawyer noted that his client never said, “from me”. Ms Wright maintained that it was suggestive.

‘waste of the court’s time’

The lawyer noted the repeated references to God in the text messages.

“He has a way of putting God in a lot of things,” Ms Wright said.

The complainant told the court that she had provided most of the text messages to the police as some could not fit on the page.

“I put the most important ones on the page,” she said, adding that she could not figure out how to put all of the text messages on the page.

Asked how the court was supposed to see the context, Ms Wright said she had the messages on her phone.

She said she did not submit to the police her response to the text messages, as it was “not necessary”.

The woman said that she went to the police the following week after receiving the text messages.

“Ten days after. The 16th,” the lawyer said. “You saw no urgency in going to the police the very next day?”

“Not at the moment. No,” Ms Wright said.

Marks said he had no further questions and apologised “for the waste of the court’s time in relation to this matter”.

Using girlfriend to communicate with ex-wife

The next witness was the investigator, detective Corporal 831 Nekisha Andrews.

Andrews told the court that on July 16, 2021, about 11:30 a.m., she was on duty at Central Police Station when Ms Wright reported against Adrian Wright for allegedly breaching a protection order.

Andrews said she saw the defendant at the office, informed him of the report and recorded a statement from Ms Wright.

She handed over a copy of her decree nisi, a copy of the protection and SMS text messages.

The detective said that later that evening, she cautioned and interviewed Mr. Wright, who gave a written statement.

The officer then charged Mr. Wright with breach of protection order.

In his statement to the officer, Mr. Wright said that from 2017, when everything was “fresh” between him and Ms Wright, he used to message her to come by.

He said that that is when Ms Wright took him to court for a protection order because she did not want him to be “calling her to beg her back”.

Mr. Wright said it was not until he started a new relationship that he stopped communicating with his ex-wife.

He said that when Ms Wright realised that he had cut her off completely, she took him back to court and said he could not get to him freely in relation to their son.

Mr. Wright said that because of that, he decided to use his girlfriend as the third person to communicate with his ex-wife.

However, Ms Wright had a problem with that also and said that he wanted to communicate with him directly and if he did not open communication with her, he would lose his son.

Mr. Wright said that when his ex-wife sent him the messages, he was basically trying to tell her that he did not want to hear from her through messages because she was trying to make it look as if he did not know what was going on in their child’s school life.

“I did message her back. It’s not that I am saying that I am not accepting the divorce.”

He said he had told Ms Wright that he did not like how her family lives because she wanted to force him to accept her family lifestyle – “like inviting exes to house parties and everybody is still close”.

Mr. Wright told the detective that he did not threaten Ms Wright but wanted her to know that he did not want to have anything to do with her and was just expressing how he felt.

He said he told his Ms Wright she would die a forcible death because of what she had put him through.

“The way she speaks is like she wants to have it like I can’t live without her. But that’s not the case.”

Mr. Wright said he did not see his messages as harassing Ms Wright as he used to do it before “but not now”.

The detective told the court that Ms Wright had told her that she had responded to the text messages and that she had texted Mr. Wright before he sent his messages.

Marks had no further questions in cross examination.

The prosecutor declined re-examination and told the court that was the end of the prosecution’s case.

The magistrate said that before hearing from the defence counsel he wanted to hear from the prosecutor.

He asked Samuel if she was satisfied with the state of the evidence in the matter.

Samuel said she had her reservation about the case but as it relates to the circumstances, it was advised that the court hear the matter.

The magistrate said that no case was made out against the defendant, who was told that he was free to leave.