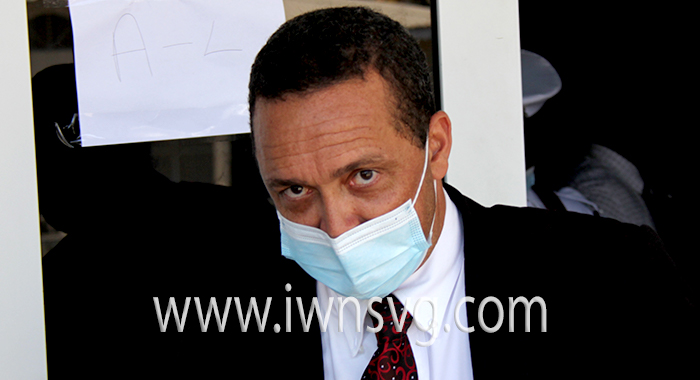 “It baffles me as it does others in this room what triggers suspicion when you see a black man with a bag over his shoulder. What triggers in the mind of the police?” Connell told the Serious Offences Court on Tuesday.

He was mitigating on behalf of Elton John, 21, of Pole Yard, Arnos Vale, who pleaded guilty to possession of 65 grammes (2.3oz) of cannabis.

The court fined him EC$100 for possession of the drug, which he paid forthwith, thereby avoiding a one-month jail term.

Two other men were fined for marijuana possession on Tuesday, while a third pleaded not guilty and will face trial in connection with the charge against him.

“When he (John) was approached, he did tell the officer, yes, I hustle. Seeing the cannabis, he (the officer) automatically makes a nexus between hustle and selling that (cannabis),” Connell said.

He told the court that John sells vegetables in Kingstown.

The facts of the matter, as read by acting Corporal of Police 754 Tekisha Harry, are that on Friday, about 9:35 p.m., at Arnos Vale, Sergeant 147 Lewis headed Special Services Unit officers on mobile duty.

In Arnos Vale, near Options Supermarket, John was seen with a blue bag strapped across his body.

It appeared that he recognised the police officer and began to act suspiciously.

PC 761 John signalled John to stop and the defendant consented to a search.

In the bag that John had strapped across his back, police found 25 small bags containing plant-like material resembling cannabis.

“Officer, ah hustle me does hustle,” John said, when cautioned.

In mitigation, Connell noted that his client pleaded guilty at the first opportunity and has no previous convictions.

He said John was “extremely remorseful for possession of 65 grammes, about 10 grammes over what he is permitted to have”.

The lawyer told the court that his client “hustles”

“He sells garlic, onion, toilet paper outside PH Veira. Nothing wrong with that hustling.”

The lawyer asked whether the police had asked John what he meant by “hustle”.

‘he fits the suspicious look’

“He fit the criteria, so they throw him in the vehicle and they carried him on a tour,” he said, adding that officers took John and another young man they had allegedly met with nine dime bags of marijuana.

“But because he fits the suspicious look, a little black man with a bag, they pick him up too…

“They threw him in the cell ’round there that is not fit for dogs. It was built for locals hundreds of years ago. You could hardly breathe in it.”

The lawyer said he went to the station and tried to explain the to officers that the first thing they had to do was to weigh the cannabis.”

He said the cannabis that the other young man had amounted to 28 grammes (0.99 oz).

“They put him back in the cell, where he had to wait for another four hours before the changing of the shift to free him.

‘no progression’ of ‘the black man in St. Vincent’

“We talk about the progression of the black man in St. Vincent. Ain’t no progression. We are enslaved in the mind.

“I will try not to talk anymore about marijuana … because I have reached my end. Police seem to have an orgasmic effect when they find this. And no matter who talk about it, they have no regard to try to ease the blow on young men like this.”

Connell said that John told the police that he was going to smoke the marijuana.

“It is so small an exhibit, the court, you ask the prosecutor to put it on the table. He has spent 48 hours in the cell barefoot.”

The lawyer asked chief magistrate Rechanne Browne, who presided, whether she had ever visited the cell at the Central Police Station.

She nodded in the affirmative.

“It was built hundreds of years ago. The ventilation is poor,” Connell said.

“He has suffered for 48 hours and still they bring him to court to finish him off.”

Connell said that after John was in custody for 48 hours, Station Sergeant Dabreo telephoned the duty officer so that he could be granted bail.

The lawyer said the officer “seems to be one of the police thinking outside the box, who understands what the prime minister was trying to explain:

“Once you are not in contumelious disregard for the law, when you meet men like him, although he look a certain way and he triggers your suspicion — he is not of a lighter hue. I am being real … lighter hue, means the skin wasn’t black. They wonta act so. And we have to stop doing that. We hate we.”

‘You are becoming your own massa now’

Connell, who is also of “a lighter hue”, said he could not understand how people have “that mentality”.

Connell said that Dalloway, “another officer who thinks outside of the box” had the night before granted bail to Tevin Ollivierre, who was allegedly found with 91 grammes (3.2 oz) of cannabis in his possession.

Also on Tuesday, Ollivierre pleaded not guilty to a charge that on March 12, at Paul’s Avenue, he had 91 grammes of cannabis in his possession with intent to supply.

The court allowed station bail to continue and set his trial for April 19.

Connell commented about his client being tried for 91 grammes of cannabis.

“Because this amount is illegal. And we will hear the usual representation by this side,” the chief magistrate said, referring to the defence.

“It is very hard to shed off the subconscious of 400 years. [Former] commissioner of police Miller couldn’t shed those subconsciouses off of his brain.”

He said he had suggested to Miller, when he was police chief 10 years ago, that people charged with “possession of bush” must be granted station bail.

“He said, ‘Connell, ever since I was a constable, you never got bail for cannabis,’” the lawyer said.

“I am trying to explain to you that you have to take off the blinkers of colonialism, but they are high on the cannabis of colonialism so much that they cannot think for themselves.”

He asked the court to reprimand and discharge his client.

However, the prosecutor, Station Sergeant of Police Renrick Cato noted to the court that possession of cannabis with intent to supply is still an offence in St. Vincent and the Grenadines.

He said that police are acting within the law when they make such arrests.

He said that the marijuana that John had was “packaged” and he said that he was hustling.

Cato said he would not recommend that John be reprimanded and discharged.

In handing down her sentence, the chief magistrate said that while the marijuana was a small amount, the court looked at the way it was packaged and the meaning behind the words John used when he was asked.

Connell said that the marijuana that John had “is two day’s smoke”.

Commenting on the issue of the arrest of people with quantities of marijuana for which they cannot be charged, the chief magistrate said that police ought to be guided by the law.

“Those that have come before the court are arrest-able amounts but you have to ensure that you do not trample on other persons’ liberty for amounts that do not match the amount. So persons, you know what you can arrest for. Do not have them detained inordinately. Get your house in order from the beginning. You cannot pick up, detain and then find out if that is the case. I am just saying make sure you are aware of the law.”