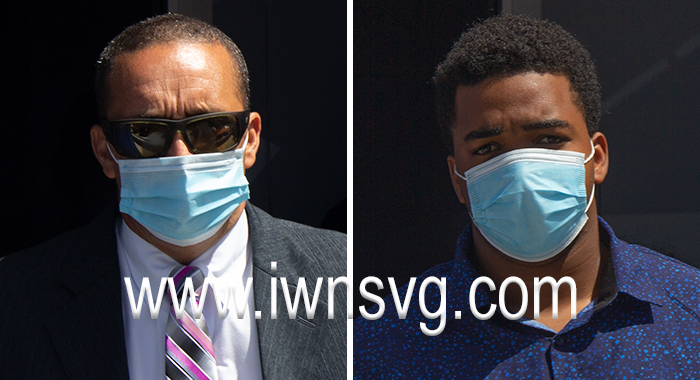 A composite photo of defence counsel, Grant Connell, left, and the virtual complainant, Romell Gibson, outside the Kingstown Magistrate’s Court on Tuesday, March 15, 2022.

Grant Connell, the lawyer representing the duo accused of assaulting a student at Community College, resulting in actual bodily harm, says that the student is the subject of a “pending investigation” into an allegation of indecent assault.

Jardel Williams, 21, of Brighton, and Tameka Phillips, 29, of Ottley Hall, appeared before the Serious Offences Court and pleaded not guilty to charges that on Tuesday, March 8, at Glen, they did enter upon the St. Vincent and the Grenadines Community College in Glen, to wit its yard, with intent to commit an offence.

They pleaded similarly to a charge that on the same day, also at Glen, they assaulted Romell Gibson, an 18-year-old student, of Chester Cottage, causing actual bodily harm.

The matter was transferred to the Kingstown Magistrate’s Court for Tuesday.

When the matter was called, the prosecutor, acting Corporal of Police, Corlene Samuel, amended the charge to add “Erescia Phillips” to the name “Tameka Phillips”.

Samuel told the court that Phillips had been charged previously in that said court under the name “Eriscia Phillips”.

Senior Magistrate Rickie Burnett noted that the offences were allegedly committed in Glen and that the accused were arraigned before the Serious Offences Court, then the matters were transferred to his court.

Samuel had no objection to the matter being heard at the Kingstown Magistrate’s Court, added that they had been set for a date for hearing.

She said that on that date, the prosecution would be ready to proceed.

Connell said that defence was ready to proceed.

The lawyer looked at the prosecutor who was watching him and asked her if she wanted to say something. Connell then sat down.

“This is a completely diffident matter that counsel is hinting to the court,” Samuel said.

She said that it had nothing to do with the charges that the court was considering.

“So I don’t understand why counsel is trying to hint something. If there is an investigation as it relates to the VC (virtual complainant), it doesn’t change the price of eggs that we have a matter with these two defendants.”

She said that the hearing was not proceeding on Tuesday because Connell had not gotten disclosure.

“But if he is prepared, so be it,” Samuel said.

But the lawyer responded that what the prosecution needs to say is that it had failed to fulfill the order of the court.

“If the defence intends to raise certain issues before the court and there is a pending matter that incorporates that, I humbly indicate it to the court,” Connell said.

“If my friend does not want me to hint, it is a sexual nature: indecent assault of an individual by the VC that we intend to raise as part of our case. So if the prosecution doesn’t want me to hint, I will put it in detail.”

The prosecutor, however, asked if the allegation involved the defendant.

Connell continued, saying there are “certain issues that will come out that the court may be able to have a better understanding of what is before the court”.

He said there is also “the issue raised with the police about something called offensive weapons.

“Obviously, the police don’t do their job fully so there are certain issues that have to be pointed out to them.”

The lawyer said that had disclosure been done, he would have been in a better position “to indicate certain things to the court”.

The matter was adjourned to April 6.