A House of Assembly staff member, right, turns away a woman, saying she was not “properly attired” to pay respects to Sir Frederick as he lay in state in the assembly chambers. And two journalists were similarly turned away for the same reason, although no dress code for entry to the assembly chamber had been announced ahead of the funeral (iWN photo) 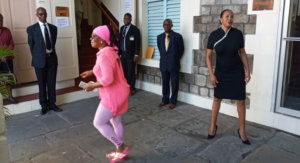