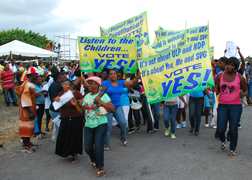 TAIPEI, Taiwan: “Everything has been done openly and transparently in accordance with the best practices of good governance.”

That is what the government of St. Vincent and the Grenadines (SVG) says in response to questions from Leader of Opposition Arnhim Eustace regarding an EC$4m (US$1.4m) Special Warrant.

The funds have been allotted to finance the Unity Labour Party (ULP) administration’s “Vote Yes” campaign ahead of next month referendum on a new constitution.

No state funds have been provided for the opposition’s “Vote No” campaign.

Eustace, in his capacity as Chairman of the Public Accounts Committee (PAC), wrote to Director of Audit Leon Snagg on Monday.

He said that the arrangements for the funds were “unusual and highly improper particularly in relation to the details of disbursement”.

Snagg has told BBC Caribbean that he sees nothing wrong with government being given state funds to run the campaign.

He said that while Eustace used his authority as Chairman of the PAC to seek answers from the Director of Audit, Eustace “failed and/or refused to summon meetings of the PAC despite public urgings by [Prime Minister Dr. Ralph Gonsalves] for him to do so”.

He further said that the proposed revised constitution, against which the NDP has launched a “Vote No” campaign, “contains enormously increased power for the Public Accounts Committee including the powers to summon public officials and documents”.

“Indeed, if the new Constitution were in effect, the Leader of the Opposition would have had no reason to write the Director of Audit for answers to his queries; he could simply summon all concerned and all relevant documents on this matter before the Public Accounts Committee,” King said.

He said that the adoption of the new Constitution is a vital public policy, approved by Parliament.

“The Leader of the Opposition and his other naysayers are looking for side-shows in a futile attempt to distract voters from the main event, that is, the Referendum and the approval of the New Constitution.”

He noted that the entire constitutional reform exercise, which began in February 2003, has been financed by the government of SVG.

“The campaign to educate and persuade the electorate to “Vote YES” is obviously a central element of that public policy. Accordingly, that too, is required to be financed by the government,” King said.

Cabinet decided that state funds would not be used in the “YES” campaign to finance “T” shirts and other personal apparel,” he said.

King however did not say how these items would be purchased but said “…there are substantial campaign items to be legitimately financed”.

Cabinet also appointed as “Director of Operations” Senator Julian Francis, who is also General Secretary of the ULP.

“A Special Warrant was issued, in accordance with law and would subsequently be put before Parliament in a Supplementary Appropriation Bill,” King said.

An account has been opened and four senior public servants, the Cabinet Secretary, a Senior Assistant Secretary, and two senior officers from the Accountant General’s Office, were appointed as signatories to the account, he said.

Dr. Ralph Gonsalves, who is also Minister of Finance, approved the Special Warrant.

Eustace said this week that the ULP administration was benefitting from the public purse.

His letter said that without “appropriate arrangements”, the campaign “could lead and be conducive to fraud and corruption”.

“The whole process that is being undertaken right now, to my mind, it is not legal,” he further said on his New Democratic Party (NDP) programme on Nice Radio.