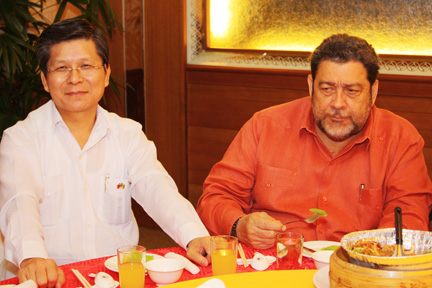 TAIPEI, Taiwan:- The government of St. Vincent and the Grenadines (SVG) has taken note of the “extraordinary things” that are happening regarding the relationship between Taiwan and China.

Taiwan and China split in 1949 at the end of a civil war, but Beijing considers the self-ruled island to be part of its territory awaiting reunification, by force if necessary.

The relationship between both capitals has warmed since the Ma Ying-jeou government came to office in Taipei in 2008.

Both countries have agreed to a diplomatic truce and there has been increased economic cooperation. China has lifted a ban on its tourists visiting Taiwan and has eased restrictions on some agricultural products.

(Go to the homepage to subscribe to I Witness-News)

In the latest act of animal diplomacy, Taiwan on April 17, gave China a pair of endangered deer and one of indigenous goats.

SVG Prime Minister Dr. Ralph Gonsalves noted in a meeting with Vincentians in Taipei on Friday, April 22, that 700,000 Taiwanese are living and working in Shanghai.

He further noted that the figure is larger than the population of the eight-nation Organisation of Eastern Caribbean States (OECS), of which SVG is a member.

“We have to watch things as they are happening before you and to change strategically,” Gonsalves said.

“And, we have to accommodate ourselves to those changes and for our relations to evolve. Not for us to abandon Taiwan and Taiwan abandon us but to evolve in the changing world,” Gonsalves said during at the event, which was also attended by Taipei’s ambassador to Kingstown, Weber Shih.

SVG is among 23 small and developing states in Latin American, the Caribbean, Africa, and Oceania that recognise Taiwan as an independent state.

In recent years, many of Taipei’s former allies have switched their diplomatic loyalties to Beijing as China emerges as an economic power house.

Gonsalves further noted that Taiwan has over US$100 billion invested in China, 40 per cent of investments there.

“It means that, relatively speaking, there is a diminution, for instance, of Taiwanese investments in the United States,” he said.

Gonsalves, who is also the Minister of Finance in Kingstown, said that while the volume of investment was increasing “it’s falling relative to what is taking place across the Taiwan Straits.

“… That is bound to have implications for Taiwan’s foreign policy so that across the Taiwan Straits that relationship becomes, if not paramount, very high on the totem pole,” he said.

Gonsalves further said that the United States “has a security umbrella for Taiwan. Whether they will keep that umbrella for a prolonged period of time, is a question which one is not sure about, as noting the reluctance, thus far, to sell Taiwan the new generations of F-16 fighter aircraft.

“In short, we have diplomatic relations with Taiwan. We are friends together but you can’t close your minds to 1.3, 1.4 billion people next door,” Gonsalves said.