World Vision Taiwan shows many ‘the face of God’ 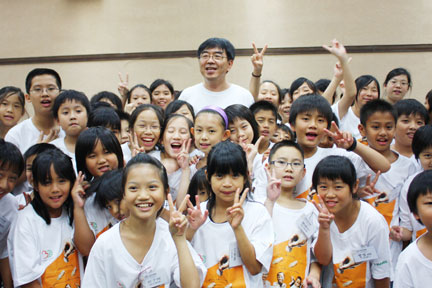 Jank Du and World Vision Taiwan have been giving hope to poor children in Taiwan and around the world.

TAIPEI, Taiwan — Mahatma Ghandi, India’s political and ideological leader during its struggle for independence from Britain, once said there are people in the world so hungry that God cannot appear to them except in the form of bread.

If Ghandi is right, Christian charity World Vision Taiwan has shown the face of God to many people in the Horn of Africa, where prolonged drought has left 10 million starving.

The organisation has also shone the light of Ghandi’s “God” in the direction of 45,000 children in Taiwan, half of whom come from the nation’s indigenous population, among its poorest.

These children, who comprise the organisation’ 100 voices children’s choir, are given hope of improved socioeconomic circumstances for themselves and successive generations of their various ethnic groups.

In addition to providing for their physiological and social needs, and their education, World Vision Taiwan hones the children’s talent in singing and music and uses it to express their hopes.

Many of these children were affected by Typhoon Morakot in August 2009, the deadliest in Taiwan’s history. The storm killed 461 people and left NT$110 billion in damage.

Some of the children lost parents to the typhoon, further compounding the economic circumstances in villages and communities where the realities are starkly different from Taipei City and other parts of urban and sub-urban Taiwan.

World Vision Taiwan on July 30 and 31 staged its 22nd annual “30 Hour Famine Hero Rally”, a major thrust in its efforts to raise NT$182 million this year.

Several celebrities performed at the event, including this year’s spokespersons Crowd Lu and Cheer Chen, who after a trip to Swaziland this year, have been raising awareness about the depraved condition in which some of that African nation’s children live.

“The main concept is that we need to be empathetic with those people who are suffering,” Hank Du, executive director of World Vision Taiwan said of the idea behind the 30-Hour Famine.

“We don’t know how to share the pain of people with HIV/AIDS, we cannot really understand the suffering of people who are suffering from war or from earthquakes.

But everybody can share the feeling of the hungry because that is easy,” Du explained.

The Famine, Du said, draws on Christian teachings and he noted the Bible’s command to have mercy on the poor and widows, adding that the Bible also teaches that real religion is to take care of the suffering.

“We want most of the donation to go to the community, go to the program, to the children and families,” Du said.

“It is not just share the need and open a door to receive whatever people want to give. We receive based on the plan and we report what we will do,” he said.

Monies given to World Vision Taiwan goes directly to those in need without passing through state channels, Du said.

“We have never used any money from our donor or supporters in any country to go to the local government or any government in any nation to do the service,” he explained.

To residents of Taiwan, where food is available cheaply 24 hours a day — every day, choosing not to eat for 30 hours may indeed be a famine and offers insight into how millions of people across the world exist.

For Gandhi also said, “The best way to find yourself is to lose yourself in the service of others” and “Man becomes great exactly in the degree in which he works for the welfare of his fellow-men.”