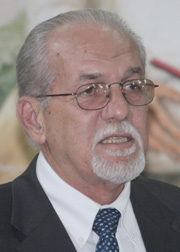 KINGSTOWN, St. Vincent, March 21, IWN — The general secretary of the ruling Unity Labour Party (ULP) has apologised for a statement the Opposition made in New York and has challenged the nation’s calypsonians to sing about it.

Opposition Leader, Arnhim Eustace, gave a “follow-up” on a story of a female constituent, who, he said, had gone to a village shop to credit one small onion, 1 pound of rice, and 1/2 chicken back-and-neck.

The items were to be prepared for a family of 10, Eustace said, citing the shopkeeper.

Read: Eustace’s half pound of chicken back story draws ire

Callers to some radio talks shows — mainly those supportive of the ULP — doubted the story and said Eustace, who spoke at a town hall meeting organised by his New Democratic Party (NDP), was embarrassing the nation.

And, Sen. Julian Francis, ULP general-secretary, spoke on the issue on his weekly radio programme on Tuesday.

“I want to say to the people in New York who listened to Mr. Eustace — and, unfortunately, this thing is on the Internet, so people in Canada and all over the [world heard it] — I want to apologise to Vincentians that the Leader of the Opposition will take this sort of slant, not only by embarrassing the individuals of which he speaks — because these people know who he is talking about, let’s not get away from that,” Francis said.

“When he gives these examples, maybe he tries to copy Prime Minister [Dr. Ralph Gonsalves], and [U.S. President, Barack] Obama and the typical American politician who would pick up good examples from their constituencies and good examples of human behaviour and so on, but he on this bitter end of back and neck and every time he comes with this thing of back and neck. He has this fixation on back and neck. No question about it,” Francis said.

“And I am going to challenge the kaisomen of this country. … A Kaisoman has to do something like what professor did and change up some of them things here and give we something on this thing called back and neck,” Francis said.

He further said there are Vincentians in New York “who continuously do work for St. Vincent and the Grenadines.

“It so happens that some of them support the Unity Labour Party. There are some who support the NDP,” Francis said.

Read: PM suggests US$80 million for airport as calypso topic