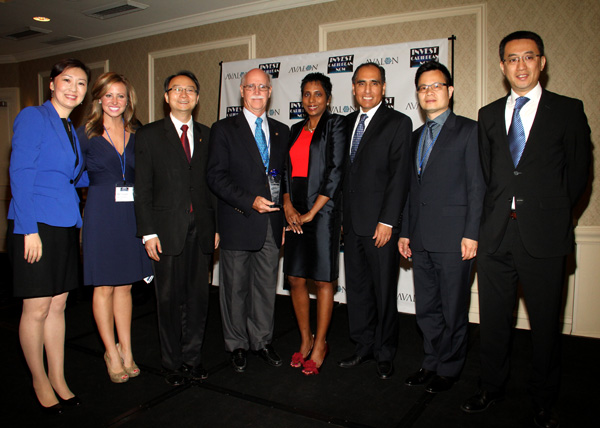 ICN founder Felicia Persaud, 4th from right, with Mike Ronan, vice president of government relations for the Caribbean, Latin America and Asia at RCCL, 4th from left; Miguel Reyna, director, Port Business Development and Asset Management, 3rd from righ; Kara Coleman, news anchor of One Caribbean Television and ICN 2013 emcee, 2nd from left and the China and the Caribbean panellists including Li Li at left; Consul in charge of economic and commercial affairs of the Consulate General of China in New York, Xiaoguang Liu; 3rd from right and Johnny Liu of the American Chinese Commerce Development Association at right. (Photo: Hayden Roger Celestin)

Caribbean governments were on Wednesday urged to participate in a business development and investment promotions trip to China this fall as the curtains came down on the Avalon Invest Caribbean Now Forum in New York City.

The invitation was extended by Li Li, managing director of the Chinese American Business Development Centre, and seconded by the Consul in charge of economic and commercial affairs of the Consulate General of China in New York, Xiaoguang Liu, and Johnny Liu of the American Chinese Commerce Development Association. The three were part of a panel on “China and the Caribbean” at ICN 2013, which came on the heels of Chinese President’s Xi Jinping first visit to Trinidad on May 31 and his pledge of more than US$3 billion in loans to 10 Caribbean nations and Costa Rica on June 2.

“The Chinese private sectors are seeking opportunities in the Caribbean such as hospitality, real estate, healthcare and education industry because they are easy to operate, are transparent and create jobs,” Li said.

She said the Caribbean, located in the centre of the Americas, provides the advantage of easy access to markets in the North, South and Central America and serves as a bridge to the markets in Europe.

Citing statistics that said up to 100 million Chinese will be travelling abroad by 2015, Li said the time was right for the Caribbean to target this key demographic, especially since the Chinese consumer works hard and has spending power and “the Caribbean has garnered critical acclaim as a Mecca for tourism with significant investments in that and related sectors”.

Li also pointed to figures that showed the Chinese outbound travel market will be US$590 billion by 2020.

The panel was presented by the Sino-American Friendship Association, (SAFA) and supported by The Chinese American Business Development Center, (CABDC) and the American Chinese Commerce Development Association, (ACCDA). Arthur Piccolo of the New Sports Group moderated the forum.

Meanwhile, Anthony Eterno, of the Caribbean Affairs Office of the Western Hemisphere Division in the US State Department, in his speech on the “US’ views on Investing In The Caribbean,” insisted that the U.S. Obama administration remains committed to an economic partnership with the region that stimulates growth.

And, ICN Founder and CMO of Hard Beat Communications, Felicia Persaud, urged Caribbean governments to do more to “tell and sell” the diverse Caribbean investment story to the right people because the region “is relevant” despite what the naysayers may claim.