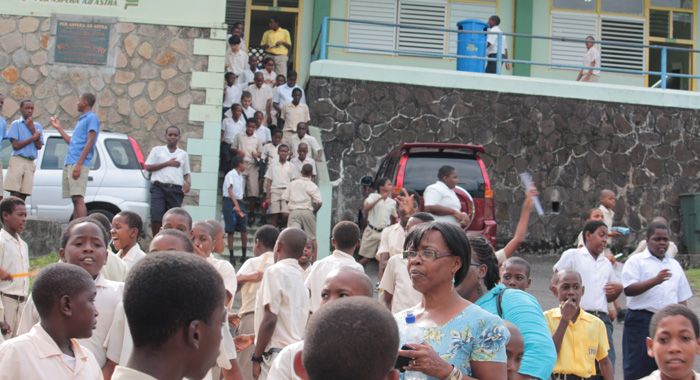 Students file out of the St. Vincent Grammar School in Kingstown after writing the Common Entrance Exam on Friday, June 7, 2013. (IWN photo)

KINGSTOWN — Grade 6 students on Friday spoke positively about their performance in this year’s Common Entrance Examination (CEE), which is likely to be the last time that the test will be used to determine secondary school placements here.

“It was very easy,” he further said, adding that he thought the general paper exam was especially easy.

“I do well in general paper at school, so I find that was easy. I know I passed,” he said, adding that he would like to attend the Thomas Saunders Secondary School.

“I love sports and they deal with sports a lot,” he said of the school.

Zamaro was accompanied by his older sister, Zakiyah Mofford, who went to greet him after the exam.

Zakiyah was among the many relatives, parents, guardians, and teachers who endured the blazing sun to stand in support with their loved one writing the CEE.

“He is my little brother and I support him and want the best for him and want him to go to a good school. In order for him to be comfortable, I was here along with my parents,” Zakiyah told I-Witness News, as she pointed out that their mother is one of Zamaro’s teachers.

The nation’s Grade 6 students are guaranteed a place in secondary school but the CEE examination will determine which school each student attends.

The Ministry of Education says 2,334 students –1,226 males and 1,108 females — were registered to write the examination.

Students wrote the English language, mathematics, and general paper components of the examination on Friday, having had their reading and composition writing assessments in April and May, respectively

Shirla John, a teacher at the Lodge Village Government School, waited along with other teachers and parents outside the Grammar School for her students to complete the exam.

John, who has been a teacher for 22 years, has prepared her first and possibly last Grade 6 students for the CEE, as the Government moves to implement the Caribbean Primary Exit Assessment (CPEA).

The Caribbean Examinations Council (CXC) administers the CPEA, and the examination body says the CPEA will ensure that students have the skills needed to succeed at secondary school.

John waited outside the school from 8 a.m. until the exam concluded at 3:24 p.m.

“The children are expecting that you will be with them to the end, and just being here is like a means of support for them,” the teacher said.

“It is like watching the children grow up through the seven years and then, at the end, you are there with them, seeing them like blossom. It is like an honour,” the teacher further told I-Witness News.

Tamesha Gloster, mother of Tamika Gloster, was among the group waiting for the students from the Lode Village school. She also arrived at 8 a.m. and stayed until the end.

“I wanted to show interest in her; that her granny loves her dearly,” she said of the Kingstown Preparatory School (KPS) student.

Sophia said the exam was “good” and that she is confident that she will attend the Girls High School (GHS) in September.

Luwenda Samuel of Diamonds had a grandson writing the exam.

“I came along with my grand boy for his Common Entrance and I hope and trust he succeeds … He needs my support and that is why I came,” she said.

The grandson, Brianson Samuel, a Calliaqua Anglican School student, said the exam was “good”, that he liked the mathematics component and wants to Bishop’s College.

Meanwhile, student Nickya Alexander, was barely audibly since she is recovering from a cold and is hoarse.

“I studied every night and I listened attentively in class,” the student, who is also eyeing a place at the GHS said.

Nickya’s mother, Jozel Alexander, was confident that her daughter will do well.

“… she is a hardworking student so I am not nervous or anything. I am just waiting on the results right now,” she said.

“On evenings when I went home, I studied, and I made sure I studied hard, because I want to pass to go to a good school,” she told I-Witness News.