More politics in some churches than between political leaders – PM 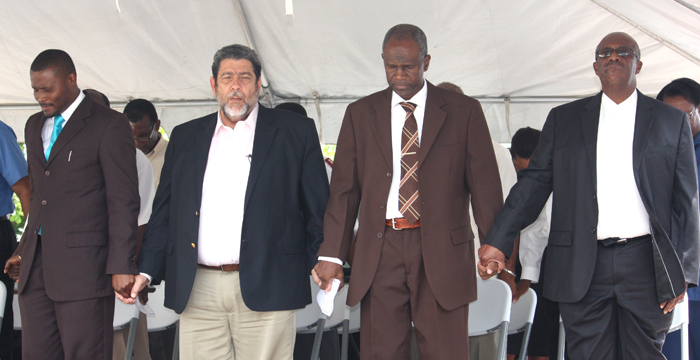 There is more politics in some of the nation’s churches than between the leaders of the two main political parties, Prime Minister Dr. Ralph Gonsalves said on Monday.

He made the point at the National Day of Prayer Rally in Kingstown as he urged Vincentians be united and tolerant, notwithstanding the competitive nature of the society.

Gonsalves noted that St. Vincent and the Grenadines is a competitive society, where people compete for jobs, carnival queen, churches compete for souls, and politicians for political power.

“Despite all this competition, it is important for us to be united and to be tolerant of each other and of each other’s beliefs and ideas and don’t discriminate against one or the other because you find yourself on the different side of the competition,” the Prime Minister said.

He said he was making the point for politicians, himself and for the clergy.

“Because, town and country tell me that in the church, they don’t want to talk about this, you got more politics than between [Leader of the Opposition, Arnhim Eustace] and meself — in some of them. So, we have to address that question with great honesty inside of the churches, inside of the Christian communities,” Gonsalves said.

“We discuss those publicly between Arnhim and meself, which is fair and reasonable, but we have to make sure that we don’t have any bitter politics inside the church, that we live in unity with one another.

“We can have our differences and ideas but we must work together in the name of one God — our saviour Jesus Christ,” Gonsalves said to applause.

“If we live with one another better than we have been doing, St. Vincent and the Grenadines will be a better place,” he further said, adding that the fact that he and Eustace are competing to be Prime Minister doesn’t make either of them “a bad man”.

“And he (Eustace) and I have to love one another as human beings. I know sometimes our respective supporters don’t want to hear that. They want Arnhim hate me and they want me hate Arnhim. Well, I ain’t hating Arnhim,” Gonsalves said of the Opposition Leader, who also addressed the rally.

Gonsalves recounted the Parable of the Good Samaritan and noted that the story is about good neighbourliness.

“And this country is too small for us not to be good neighbourly,” he said, adding that this does not mean that there wont be disputes or argument.

“… but there is no need for any chopping up and gun fighting — violence. If you have a dispute, settle it amicably. And if you can’t settle it amicably, well, there is a court of law, which is an institution established and recognised by God as a legitimate institution for the settlement of disputes,” the Prime Minister said.