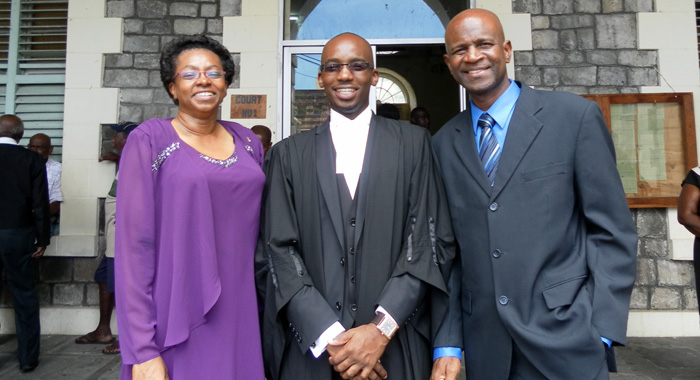 He completed the mandatory six-month pupillage period at the Chambers of Renè M. Baptiste, where he is now an associate.

They all spoke of Charles’ academic prowess, his personal attributes of charisma, humility, dedication and drive; particular highlights given by Senior Counsel stressed Charles’ professionalism and keen intellect and admonished him to uphold the principles of nobility within the profession and to practice “gentlemanliness”.

The call was presided over by Justice Frederick Bruce-Lyle, who indicated that Charles was well acquainted with him via social media. His Lordship further spoke on the importance of choosing the “right” path in one’s life, never to discount the contributions and importance of family, spirituality and to make hard work as a watchword.

Charles then took the oath and was robed by Renè Baptiste and Duane Daniel. He then made his maiden speech to the Court in which he thanked God, his father, Minister Labour, Reconciliation, Ecclesiastical Affairs, Maxwell Charles; mother, Doris Charles, minister counsellor, SVG High Commission in London; grandmother, Ruby Mattis, immediate and other family members, Sir Louis and Lady Straker, the Seventh Day Adventist Church, the SVG Shotokan and Taekwondo Associations, The Adventurer, Pathfinder and Master Guide Clubs, other well-wishers, the villages and people of Buccament Bay and Vermont.

He outlined his spiritual principles, the tenets of Taekwondo (where he holds 1st Dan Black Belt and is an Assistant Instructor at Ying Yang Martial Arts and Fitness Centre), courtesy, integrity, perseverance, self-control and indomitable spirit. He further stated that the duty of a barrister is to see that justice is done and then concluded by reciting in Garifuna, Article 1 of the Universal Declaration of Human Rights.