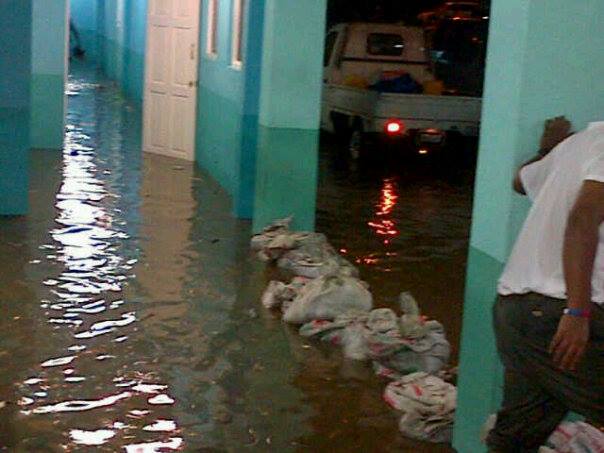 The Roads, Building and General Services Authority (BRAGSA) is slated to continue its assessment this morning (Sunday) after heavy rains on Saturday flooded the E.T. Joshua Airport in Arnos Vale and triggered landslides in several parts of the country.

The National Emergency Management Organisation (NEMO) said midnight Saturday that is has received reports of landslides at Belmont, Belair, Calder Ridge and La Croix, and advised residents and motorists in these areas to exercise caution.

“BRAGSA will continue their assessments after daylight,” Michelle Forbes, deputy director of NEMO said in a release.

The disaster management agency has said earlier Saturday night that a tropical wave was affecting St. Vincent and the Grenadines.

As a result of early evening heavy rains, the E. T. Joshua Airport was flooded and now closed.

The Airport is now expected to reopen at 10 a.m. today.

NEMO said that BRAGSA has reported flooding in the Mt. Young area.

The Congo Valley road is closed as the road has been damaged from flooding, NEMO further said, adding that BRAGSA will continue its assessment and provide regular updates.

There were also reports of flooding in Calliaqua in the area of the Calliaqua Police Station.

“The National Emergency Management Organisation (NEMO) is advising motorists to be extremely cautious while travelling, do NOT attempt to cross flooded areas, especially bridges,” NEMO said.

It further urged residents in landslide and flood prone areas to exercise caution as continued heavy rains may result in more flooding and landslides.

Residents are also urged to listen to local radio stations for any updates.