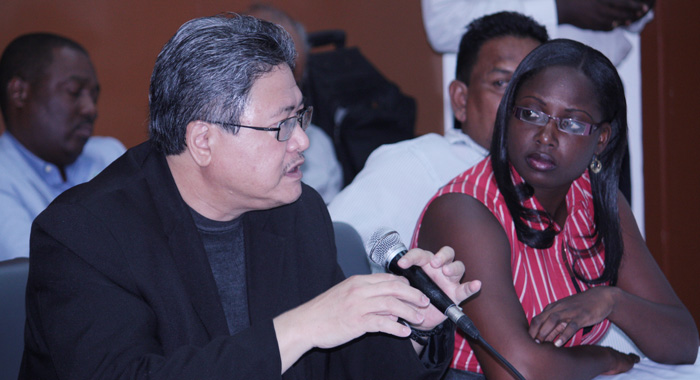 GEORGETOWN, Guyana — A video about the response to climate change in St. Vincent and the Grenadines (SVG) was the launch pad for an engaging discussion on climate change and balancing development and environmental preservation as Caribbean Week of Agriculture continued on Monday.

The launch of “Beneath the Surface — Mapping Union Island”, a Local Voices in Climate Change video, also saw a screening of the film, which focuses on Union Island in the Southern Grenadines, SVG.

The film, which was sponsored by the Technical Centre for Agricultural and Rural Cooperation (CTA), tells the story of a Sustainable Grenadines Inc. supervised construction of a 3D model of the small island.

“What we did was bring the community together to map their resources,” said Orisha Joseph, administration and communication officer of Sustainable Grenadines Inc. at the launching.

Joseph said that residents helped to identify the natural resources that are available to them, their location and how they have changed over the years.

‘So, all of that information was placed on the map … [which] became a living representation of what all the people of Union Island wanted [and] also … a tool that the government can use in their planning and their decision-making.”

Members of the community, including fishers, farmers, other stakeholders and knowledgeable persons, were then asked to put in key information on the map, including fishing grounds, ponds, and catchments, and the changes that have taken place over time.

“Some of them are saying the size of fish they used to catch, they don’t catch it anymore, the conch that they use to catch, they are not catching it anymore; the coral reefs are bleaching out,” Joseph said.

“There is an area in Big Sands where they have a lot of erosion,” she said of a section of the island where a hotel is also located.

“So, all of that information was placed on the map,” she said, adding that the model became “a living representation of what all the people of Union Island wanted [and] a tool that the government can use in their planning and their decision-making.”

Joseph thanked the CTA, Nature Conservancy and the Grenada Fund for Conservation, Terrance Phillips, and other regional partners who contributed to the project.

CWA, the premier agricultural event on the region’s calendar, brings together stakeholders for a week of activities to promote agriculture and agri-industry via policy dialoguing, learning sessions, and an exhibition showcasing the fruits of the sector.