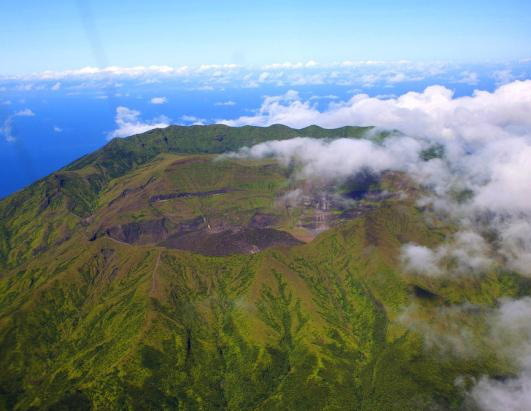 The government is hoping to harness geothermal energy from La Soufriere volcano.

An Icelandic geothermal energy exploration firm says it is confident about possibilities in this country but that scientific data is needed to analyse the potential.

“I have to say that after we have been studying the possibilities now for some months, gathering all of the information that is available for geothermal resources, we have found that there is an opportunity and therefore we have decided to go to the next stage of this journey that we are on. This is doing some surface exploration work,” Gunnar Orn Gunnarsson, chief operating officer of Reykjavik Geothermal said on Friday.

He was speaking at the launch of the testing phase of the geothermal project, which Prime Minister Dr. Ralph Gonsalves said is a “potentially game-changing initiative”.

Gunnarsson said that scientists from Iceland will come to this country next week and will remain here until mid-December, during which time they will go into the Soufriere mountains to do surface exploration work.

“This is like hiking; just scientists walking around with some measuring devices and measuring resistivity of the earth, of the volcano and by doing that, they will get an indication if there is a possible resource in the area. We are confident that there is, but first we have to do measurements to be able to confirm that,” he said.

He further said that it will take some months for the data to be analysed.

However, the company hopes that in the first quarter of next year, there would be enough information to inform a decision about whether they should proceed to the next step: proving the resource by drilling into the volcano, Gunnarsson said.

He also sought to allay the fears of persons who might think that geothermal exploration would cause seismic activity at the La Soufriere volcano, which last erupted in 1979.

“I know that people who maybe don’t understand this technology, think this could interfere with the environment or the volcano, but I can assure you that in Iceland we have great experience, over decades, of exploiting geothermal energy,” Gunnarsson said.

He said that Icelanders sometimes say that their country would not be what it is today if we they were not utilising geothermal energy.

He further noted that geothermal energy is heating all houses in Iceland and produces one-third of the country’s electricity, with some 650 to700 megawatts already online.

“And we have been drilling in some of the volcanoes …. We have about six power plants up and running; we are planning to expand that industry in the coming years,” Gunnarsson further said.

In addition to Reykjavik Geothermal, the Clinton Climate Initiative is partnering in the project.

“We are here because we think there is an opportunity in St. Vincent,” Gunnarsson said at the media launch where Prime Minister Gonsalves, Jan Hartke, global director of the Clinton Climate Initiative-Clean Energy, and Peter Williams, managing director of Light & Power Holdings Ltd., Barbados also spoke.

“My company, Reykjavik Geothermal, is a development company looking at opportunity, not only in the Caribbean, but, in other places on the globe where there are active volcanoes that we can have an opportunity in developing power plants in,” Gunnarsson said,

He said Reykjavik Geothermal has signed a contract to develop geothermal energy in Ethiopia and is also working in Mexico.

He, however, said his company “really look forward to developing geothermal energy here.

“One of the reasons is that this is an island nation, just like Iceland and geothermal, if it is there and can be utilised, can have transformational effects on this nation, just like it did in Iceland,” Gunnarsson said.