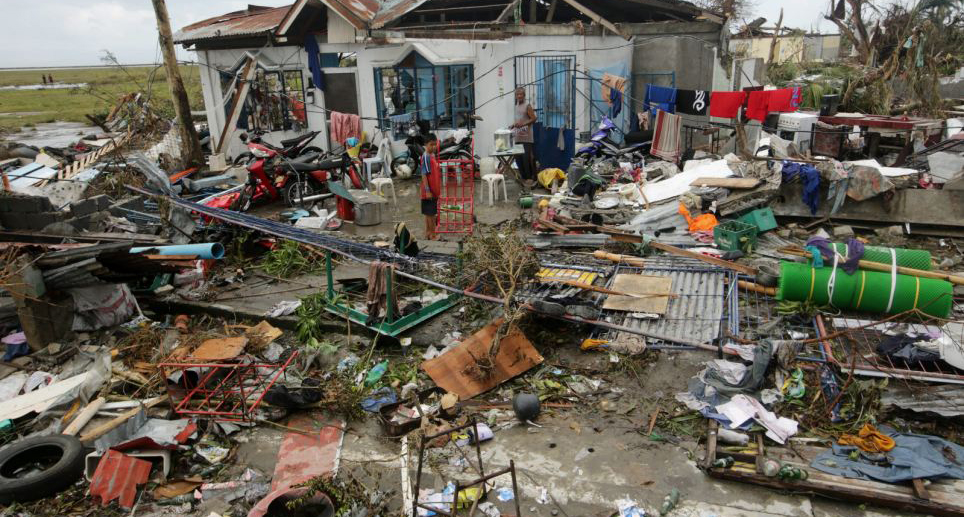 Typhoon Haiyan has left significant destruction in the Phillipines.

WARSAW, Poland — The United Nations climate summits officially opens here on Monday against the backdrop of 10,000 people feared dead in the Philippines as a result of Typhoon Haiyan on the weekend.

The storm destroyed homes, schools and an airport in the eastern city of Tacloban.

The talks are coming days after a UN agricultural agency stressed that small farmers in developing countries must have a greater role in the talks as they are the most vulnerable to the impacts of climate change.

The International Fund for Agricultural Development (IFAD), said the climate deal should recognize the impacts of climate change on the rural poor and vulnerable groups, and should commit financial support for mitigation and adaptation in developing countries, the UN Media Centre reported.

“Half-measures are not an option with climate change. Unless urgent action is taken, much of the progress towards the MDGs (Millennium Development Goals) will be reversed,” Kanayo Nwanze, president of IFAD said, underlining that “the rural poor, small and large farmers must be part of the solution”.

Further, each 1-degree rise in temperature will cause a 25 per cent increase in food prices. In Africa, 75 to 250 million people will face water shortage by 2020, he further said.

The agency further said that climate change makes poverty reduction more expensive and, if left unchecked, will undermine achievements made to reach the global anti-poverty targets known as the MDGs.

Two Caribbean Community (CARICOM) nations — St. Vincent and the Grenadines (SVG) and Guyana — are among 38 nations recognised by the Food and Agricultural Organisation recognised this year for halving undernourishment, ahead of the 2015 target.

SVG’s Prime Minister, Dr. Ralph Gonsalves, and Guyana’s Minister of Agriculture, Dr. Leslie Ramsammy, have both criticised developed countries for failing to live up to their commitments that would help poorer countries to achieve the MDGs.

And, IFAD has urged climate negotiators to move beyond their differences and agree an ambitious deal during the conference here.

“We must now assess climate risks across landscapes and value chains before making investment and policy decisions. This can no longer be ignored,” Nwanze said.

But the summit will also take place amidst criticisms by environmentalists that the talks are being held in this country, the second-largest producer of carbon dioxide emissions in the European Union.

Almost 90 per cent of electricity in Poland is generated using coal, but Environmental watchdog, Greenpeace says that the country could halve its demand for fossil fuel by 2030.

There are now 195 Parties to the Convention and 192 Parties to the Kyoto Protocol. Preventing “dangerous” human interference with the climate system is the ultimate aim of the UNFCCC, the UN says.

Among other things, the UNFCCC is committed to making a contribution to sustainable development through support for action to mitigate and to adapt to climate change at the global, regional and national level, the UNFCCC says on its website.

It is also committed to providing and disseminating high-quality, understandable and reliable information and data on climate change and on efforts to address it.

In this vein, the UNFCCC Secretariat has invited 15 journalists from developing countries around the world to take part in a climate workshop here, also from Nov. 11 to 22.

While negotiators try to reach agreements in the interest of the environment even as they safeguarding their own national economic interests, journalists will be equipped with skills to report effectively on climate change issues.

Among the topics to be covered in the workshop is climate finance, one of the primary elements of this year’s negotiations.

The UNFCC Secretariat says that finance and technology support is needed to ensure that developing countries “green their economies and build resilience”.

The panel at the climate finance session will provide an overview of the current landscape of climate finance as it relates to the negotiations and discuss work underway.

“The capacity and potential for humans to adapt is unevenly distributed across different regions, and developing countries generally have less capacity to adapt. Therefore, climate change adaptation is especially important in developing countries. This session will highlight the range of issues that are being addressed by Parties at COP 19,” the UNFCCC says.