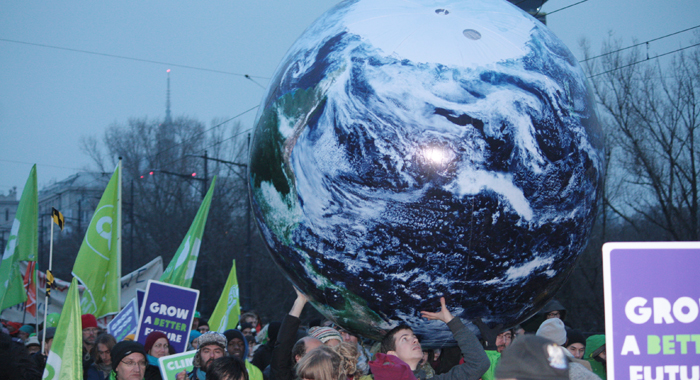 Environmentalists demonstrate in Warsaw on Saturday. Caribbean negotiators are in a precarious position as Japans revised its reduction emissions target.

WARSAW, Poland — The first week of the climate talks here in Warsaw ended on Friday with Caribbean and other small island developing states saying that they are “formulating a strong position” after the announcement by Japan that it is reducing its its carbon emissions goal.

The initial goal was to achieve a 2020 target of 3.8 per cent below 2005 levels, but the Asian nation, in a surprised announced on Friday, said it will reduce emissions by 25 per cent from 1990 levels.

Grenada’s Ambassador to the United Nations, Denis G. Antoine, who is his country’s lead negotiator at the talks, decried the silence of rich nations in the face of the backpedalling by Japan.

“There is a silence from the other developed countries to really demonstrate willingness to make a commitment to finance the climate change issues that we are discussing,” Antoine said.

He said the he believes the silence of the rich nations is because of a wait and see approach.

“Japan has stepped out, the other countries are very much not making any demonstration of support for the small island developing states against Japan.

“There is no loud voice, except the OASIS (Alliance of Small Island States) that is coming out and coming forward,” he said.

OASIS is a group of 44 low-lying island and coastal nations located in the Caribbean, Pacific, Africa, India, and the Mediterranean regions that are the most vulnerable to the impacts of climate change.

“We are coming forward and making the point that there has been commitment made to assisting with the financing for the adaptation measures that our countries need,” Antoine further stated.

Antoine said that the move by Japan is not in the best interest of the Caribbean, as Tokyo is now moving away from its commitment to reduce green house gases and to go under the 25 per cent, which it has pledged.

“So, it decides to move away from that and has not given any figure which it would deal with. I think what is clear, there is a moving away from the ambition so that we can move toward 1.5, which we were talking about. We are not now in any position to walk away with a figure that we can get commitment from developing countries.”

Ahead of Japan’s announcement on Friday, Brazil had proposed that countries contribute to a loss and damage mechanism, based on the amount of harmful green house gases they have emitted into the atmosphere.

A source familiar with the negotiations, who asked not to be identified, said that such a proposal would have scientifically quantified each country’s contribution to climate change and ask them to contribute money accordingly.

The proposal could have seen Russia contributing as much as half of its GDP, the source said, adding that the United States was very explicit in its opposition to proposal, while Russia was “more diplomatic” but equally strong in its objection.

Antoine said that the Caribbean’s argument at the talks, which are being held from November 11 to 22, “is that we are not the perpetuators”.

“The green house gas is not spilled by us, but we are being called upon to spend our own local [resources], because they (developed countries) are looking now to call upon private funding rather than the commitment to the funding. So, our case is that it is double jeopardy.”

But while another source close to the talks said earlier this week that the moral argument does not “tickle” rich nation, Antoine said that the effect of climate change on SIDs is in fact a moral case.

And while he acknowledged that the moral argument will not stand forever, he added, “But it is about accountability, it is about standing up to commitment.

He said the Caribbean is formulating “aggressively” the message it will take into the second and final week of talks, next week.

“… we are formulating a strong position, we are meeting constantly, there is on-going dialogues and bilateral and discussions at this time.”

Antoine said that at the minimum, the Caribbean will like to leave the conference “with a higher ambition on the part of developed countries to maintain their pledge and to ensure that we do no roll back from the position that we’ve had coming into this COP (Conference of Parties) meeting”.

He said that Caribbean nations within OASIS are meeting not just as the 15-member Caribbean Community (CARICOM), but also as the wider Caribbean basin.

“… we are meeting as the broader group to ensure that we have consensus and that our voice is being pushed to ensure that we come away with the small island states development aspects of ambition — raising the ambition. I think this is the most important thing,” he said.

“I think if we can walk away from here with the developed countries maintaining that they will meet their commitment to financing, especially for adaptation, I think we will have come away with not so much an assurance of a better future, but we know that with the downturn in the economies of the region, we need financing for climate change, rather than moving away from our sustainability, and our capacity building that we are trying to do with our own resources.

He said that as the talks move into the final week, the issues for the Caribbean remain the same: ensuring that there is not decreased ambition in the reduction of green house gases, the need for financial for climate change to ensure that the developed countries meet their commitment to ensure SIDs are afforded the opportunity to develop their economy, mitigation, and adaption.

“And we are here to ensure that we do no lose ground. … There is a lack of ambition to lower the green house gases and this is troubling,” Antoine said.