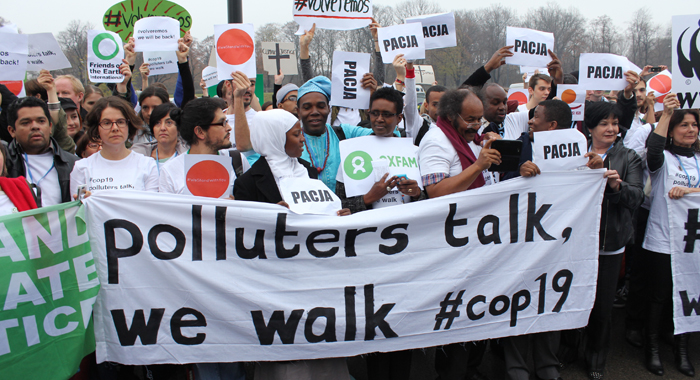 Non-governmental organisations walked out of the climate talks here on Thursday. (IWN photo)

WARSAW, Poland — Non-governmental organisations walked out of the climate talks here on Thursday, one day before they are officially scheduled to end, saying “Volveremos!” (Spanish for “We will be back”).

The walk out, the second in as many days, was supported by Indi McLymont-Lafayette, Panos Caribbean’s regional co-ordinator for Jamaica and Haiti

“Certainly, it is more than just drama. Yes, it is dramatic but it is not something that they have previously done in my experience and I think they have done it to bring attention to how much they want concrete decisions to come out of these two weeks of talks here in Warsaw, Poland,” McLymont-Lafayette, who is attending her sixth climate summit said after the walkout.

“The key thing is that the negotiations are not moving forward on critical issues such as loss and damage and compensation for countries that have faced extreme weather events, such as the Philippines, as we have just seen,” she further said in reference to Typoon Haiyan which claimed some 4,000 lives on the weekend before the talks began.

“Additionally, there are issues such as funding for adaptation for vulnerable countries like Caribbean countries. The proposal on the table is to vamp up the level of funding available for adaptation opportunities has not gotten a concrete decision, so the NGOs really want something more tangible as we are close to the end of the negotiation,” she further said.

Asked how walking out is going to help the negotiations, McLymont-Lafayette said:

“Primarily, one of the key things they have said in their release that was issued today is that it is walking out to mobilise general society, to bring greater awareness to the issues so that in turn pressure can be placed on negotiators and negotiating governments to make more concrete decisions, because this is something of urgency which we cannot afford to delay, as the negotiations are currently doing.”

Speaking during the walkout, Asad Rehman, senior campaigner for Climate and Energy at Friends of the Earth, said, “Governments come here in the light of the typhoon in the Philippines, in light of the climate science that is telling us we must cut emissions drastically, and for them to go backwards to actually increase their emissions is a slap in the face of people all around the world.

“We will be organising for tonight or tomorrow, we will be responding to the outcome and we will be mobilising and organising action in our capitals all around the world aimed at some of these rich industrial country who came here not to deliver emissions but to actually increase emissions.

“They came here with false promises about finance with the interest of polluting industry rather than the planet,” Rehman said.

Greenpeace, Oxfam, WWF, Actionaid, Friends of the Earth, the International Trade Union Confederation and campaign group 350.org walked out of the National Stadium, where the talks are held.

“We have been forced to take this action because of the failure of governments to take these talks seriously. We are not walking away from the UN process on climate change, just this conference in Warsaw, where the interests of the most polluting industries have been set above the needs of global citizens, Samantha Smith, leader of WWF’s Global Climate and Energy Initiative said

“Talks like these amount to nothing if countries refuse to come to them and negotiate in good faith or worse, try to drag the process backwards. There comes a point where the only option is to say enough is enough and to leave. With the science clearer than ever on the risk posed by dangerous climate change, heads of state need to step in and show leadership and drive this process forward,” she further said.

In a joint statement, the NGOs said, “Organizations and movements representing people from every corner of the Earth have decided that the best use of our time is to voluntarily withdraw from the Warsaw climate talks. Instead, we are now focusing on mobilizing people to push our governments to take leadership for serious climate action. We will work to transform our food and energy systems at a national and global level and rebuild a broken economic system to create a sustainable and low-carbon economy with decent jobs and livelihoods for all. And we will put pressure on everyone to do more to realize this vision.”

Rifts have widened over the last 10 days as parties fail to make progress on a mechanism for the loss and damage that result from climate change. Additionally, there is no further clarity on how climate finance levels will be increased.

The Group of 77 and China, a 133-member bloc that includes the Caribbean, walked out of negotiations around 4 a.m. Wednesday.

“They were not happy with the way the loss and damage negotiations have been proceeding,” James Fletcher, St. Lucia’s Minister of Sustainable Development said of the development.

A source familiar with the negotiations, who asked not to be identified, said that the walkouts are just dramatic gestures that do nothing to advance the positions of the parties that are walking out.

The European Parliament issued a press release after the walk out in which Matthias Groote, chair of its delegation at the talks, said, “There is a growing sense of frustration here in Warsaw, and concern over the little results achieved so far, while we need to agree on steps towards a global climate agreement. Instead, some are backtracking on their previous commitments.

“The conference is reaching a critical stage. It is now up the COP presidency to act and bring a positive drive, so it doesn’t end up in a failure,” Groote further said.

Meanwhile, the delegation’s vice-chair, Karl-Heinz Florence, said, “More than 20 years of European Union experience have shown me that who walks out of the room needs to come in again, and who closes the door needs to open it again. However, this takes time — which we do not have. We need to talk to each other!”