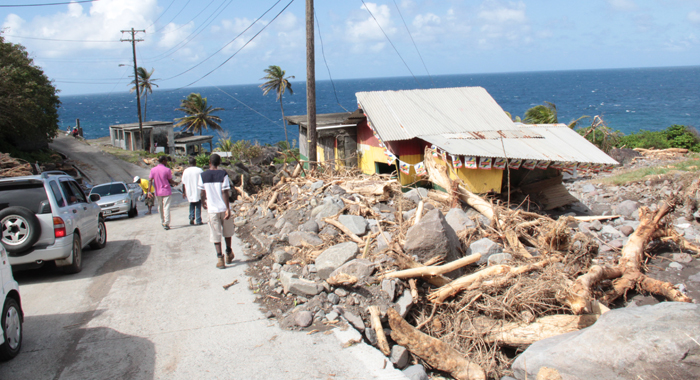 The river caused extensive damage in this area of Fancy. (IWN photo)

Two members of the opposition New Democratic Party (NDP) have called for strict measures to help to reduce the extent of damage resulting from weather events such as the trough system on Christmas Eve.

The trough system resulted in the nine deaths, while at least three people are missing and presumed dead. It also left extensive damage to housing and public infrastructure.

“This river in Fancy gives a good example. I have seen an area which I knew to be flat alongside the road and is now a deep ravine,” Opposition Leader Arnhim Eustace said in Fancy on New Year’s Eve, during a tour of North Windward.

He was speaking about an area where large logs being washed downstream destroyed a house and two other buildings.

“And there are a lot of trees from former disasters still in this river. And I can see why it contributed to the flooding of homes and other areas of St. Vincent and the Grenadines, and something has to be done about it,” Eustace said.

He referred to a video after Hurricane Tomas in 2010, in which forestry officer Joel Poyer called for downed trees to be cleaned up to avert future disasters.

“I heard the statement from Mr. Poyer which was replayed from 2010 and this is a good example of what he was talking about,” Eustace said.

He also spoke of the size of some of the boulders that were moved by the raging river.

“We have some lessons we have learnt before but didn’t take account of. And, certainly, in terms of preparation in the future, we will have to put more emphasis on prevention,” Eustace said.

“As I look at this disaster, I am convinced in my own mind of the need for greater emphasis on prevention, … and certainly we have to be strict in terms of the measures that have to be taken. There is no way around that,” he said.

Eustace commended the power and water companies for their efforts to restore serviced after extensive disruptions after the trough system.

“… but they could have had less work to do, if we had taken the necessary actions before,” Eustace said.

Meanwhile, the NDP’s candidate for North Windward, Lauron Baptiste, speaking in Fancy, said, “What we are seeing here yet again is the awesome power of nature.

“It is a sad reminder of how vulnerable we are, and I have no doubt that we will recover.”

Baptiste said that taking into account the natural elements and the human contribution to the disaster, “it would be time that we look squarely at making some hard decision that would lessen the impact from such an event, especially in the light where there are changes in the climate.

“I am saying things, like when we look at NEMO (National Emergency Management Organisation), rather than looking at preparedness, we should be looking more, as well, at prevention.”

Baptiste said that whenever there are heavy rains in Sandy Bay, a road at the Big Level area is flooded.

“So, we have to start to look at prevention, other than preparedness,” he said, adding, “We are speaking about relocation of people in low-lying areas.

“We are looking not only at rivers now, but those living close to sea. We are also looking at decisions where, if we look at our cadastral survey plans, we will see that most of the rivers, … that there is a buffer zone between the property adjacent to the rivers.

“And planning will have to make those decision, of how people really get to live on these riverbanks. They should not be allowed to build,” Baptiste said.