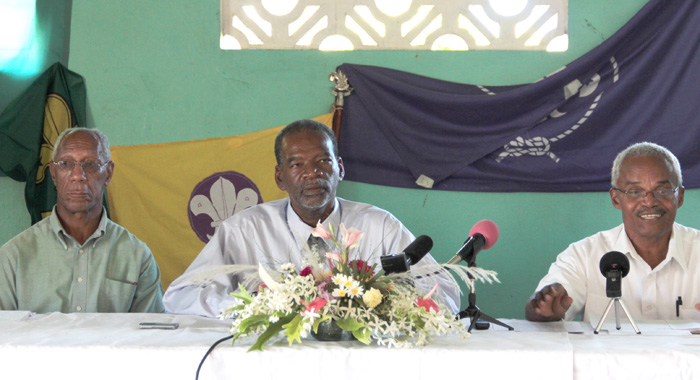 The local Scout Movement has planned a series of activities to make 100 years of Scouting in St. Vincent and the Grenadines.

The activities were announced at a media briefing on Tuesday.

The 100th anniversary celebration, on April 17, comes as the local Scout Movement continues to rebuild from one of its “lows”.

President of the Scouts Association of SVG, Morrison Baisden, said that the association is focusing on building Cub Scout packs across the country.

Last week, the Colonarie Cub Scout Movement had the investiture of its first members, and Baisden said this promises to be a large pack.

Georgetown and other areas of the county are also interested in forming Cub Scout pack, Baisden said.

Meanwhile, Charles McIntosh, a member of the 100th Anniversary Committee, said he is pleased to be associated with scouting.

“It is still a very noble organization,” he said, adding that Scouts exist all over the world.

“And it is indeed a milestone in our history that at this point in time that we can be celebrating one hundred years. It is not many organizations in the world that has this privileged opportunity to do it.

“As a matter of fact, even we in our lives have difficulty achieving this milestone at times. And any organization that would have lived to one hundred years must indeed have something good going for it,” McIntosh further said.

He said there have been “highs” and “lows” in the Scouting Movement in SVG.

“But I think the highs far outweigh the lows that we … have had. We are trying here to capture some of the past activities that really took place during the history of the development of the movement here in St. Vincent and the Grenadines,” McIntosh said.

The Scouts Association has planned an activity for every month until December.

The Scout Movement in SVG started in Georgetown on April 17, 1914 with 20 boys and one scout leader.

Scouting was founded in 1907 by Robert Baden-Powell, a lieutenant general in the British Army.