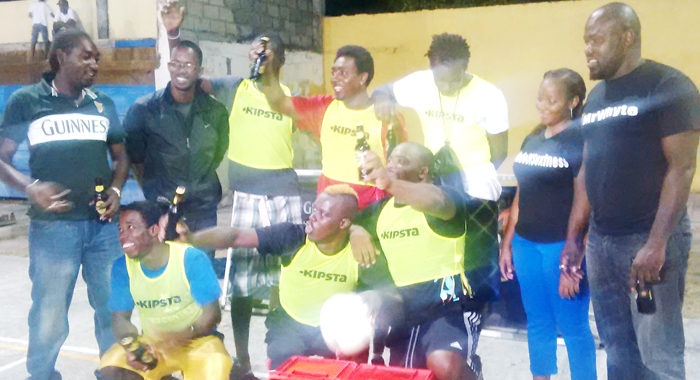 Cotton United pose with representatives of St. Vincent Brewery and the Easterval Committee.

The Guinness Street Football Challenge continued on Friday in Union Island with three teams tackling for a chance to represent St. Vincent the Grenadines in the regional finals in Trinidad.

Three teams Goal Strikers, Cotton United and Pain Killers registered for the competition, which was into its third leg.

Cotton United emerged overall winners after a tense final, which went into penalties.

The team had earlier defeated Goal Strikers, 4 goals to 1, with captain Delroy McCree contributing 2 of the goals.

In the second encounter, Pain Killers numbed for the first half the efforts of Goal Strikers to hit the mark, before faltering as Godfred Ollivierre netted 4 goals and his teammate, Romano Hooper, struck three times, in a game that ended 8 goals to nil.

The finals set saw Cotton United and Pain Killers playing each other, although that game was not necessary, as both teams had defeated Goal Strikers.

Both teams played to a goalless first half.

Godfred Ollivierre of Pain Killers scored a further 2 goal in the last three minutes, bringing his tally to 6, in a game that ended 2-0 in favour of Pain Killers.

The next leg of the 2014 Guinness Street Football Challenge will begin in Bequia tomorrow, Friday April 25, at 5 p.m.

Games have been played in Georgetown and Barrouallie.