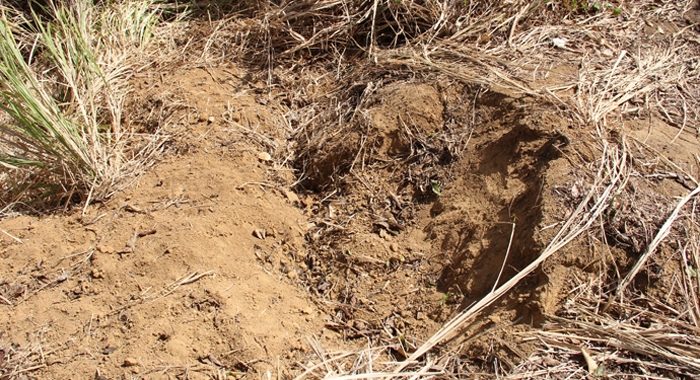 The body of Calvin Jacobs was found in this shallow “grave” in his yard in Biabou. (IWN photo)

Police have charged Biabou resident Calvert Johnson, 24, with the murder of his father, Calvin Jacobs, a 56-year-old mason, also of Biabou.

On Friday afternoon, Jacobs’ body was discovered in a shallow “grave” in the yard of the wooden house in which he and his son lived at Biabou. Police say she died on Thursday.

The deceased sustained a cutlass wound to his neck and succumbed to the injuries, police say.

A postmortem examination is expected to be performed on the body, police further said.

A female relative of the deceased told I-Witness News that Jacobs moved to the house, which belongs to his mother, when his house was destroyed by fire sometime ago.

The son had been living in the house when his father moved in, the relative further told I-Witness News.

Jacobs’ death brings to 11 the number of murders in St. Vincent and the Grenadines for 2014.

It is the first such murder accusation since August 2012, when 55-year-old Monroe Duncan, a mentally ill man, called another sibling saying he (Monroe) had killed their mother.

The woman, Lydia Duncan, 85, was found chopped to death in their home in Francois, Vermont.

Correction: Jacobs’ body was discovered on Friday and not Thursday, as indicated in an earlier version of this story.