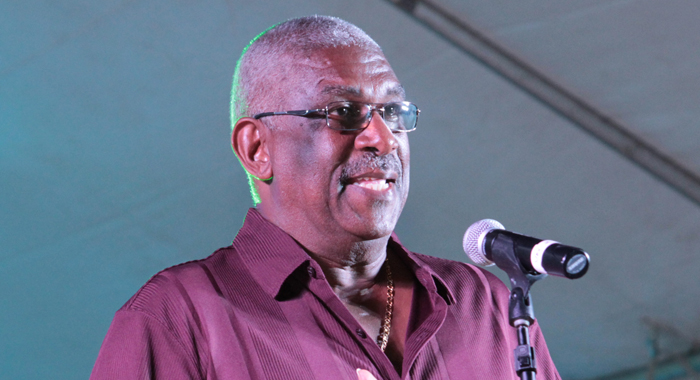 Chair of the Carnival Development Corporation (CDC) Denis Ambrose has hailed the May 3 launch of Vincy Mas 2014 a success even as he launched what appeared to be a broadside against the Carnival Bands Association, which boycotted the event because of differences with the CDC.

Ambrose told a press conference on Tuesday that Vincy Mas 2014 will be staged, even as he spoke of the challenges of staging the festival amidst increasing cost and declining revenue.

I-Witness News was reliably informed that it was not until an April 5 meeting with the Ministry of Culture that the CDC decided to stage this year’s New Song Competition, an initiative that carnival planners introduced some years ago to encourage artistes to release their music earlier.

Ambrose said the CDC is pleased with the launch, which included incident- and violence-free whistle stops to the Leeward and Windward sides of St. Vincent.

He thanked the public for the “high level of awareness” and for keeping Vincy Mas safe and clean.

“I admit also that there were some challenges facing us to stage a launching of this magnitude in these difficult times, where we are still struggling to clear some deficits from 2013,” he said.

“Let us not lose sight of the fact that the general cost of doing business continue to rise worldwide, just as the cost of undertaking any project. It cannot or does not cost the same as it did 10 or even 5 years ago. And this fact needs to be better appreciated by all parties concerned,” he further said.

Ambrose said Carnival in the region is highly competitive. “All countries are using this type of festival to bring visitors and business to their shores. We must do the same and do it better,” he said.

He added that Vincy Mas has set the pace for its neighbours, is at the forefront, and that the CDC hopes that the festival — the largest in St. Vincent and the Grenadines — can continue its strides “to stay ahead of the pack.

“From the CDC standpoint, our financial records are up-to-date and fully audited, so that is not an issue.

“In spite of all that, I am pleased to say that the spirit of the event of the launching was highly preserved, and the resolve that was shown by the CDC to continue to embrace and showcase our Vincy Mas products were unrelenting.

“To those of little faith, who perceive that the launching should be so scaled down to a block-o or something similar, I am sure that you get the message that this CDC does not back away.

“I know that as we move on in life there are times that we may wish to refresh. We too have sough to refresh this event … and we insist that this event is and was indeed to give exposure of the elements of Vincy Mas to the general public.”

“Furthermore, the components are given the opportunity to set up drink and snack bars to help them raise the additional funds for their organisations so that they actually can have a double benefit from the exercise.

“It is unfortunate that some failed to capitalise on this line of wisdom. But as we have said in the past, spare no doubt that the show will go on, and it did,” Ambrose further said.

The CDC head said he was “actually thrilled” to see the large number of young people who attended the launch of the festival. “And although many people were outside, we believe that our objectives of staging the launching were achieved,” he, however, said.

Ambrose also applauded the contribution of the rural carnivals, private promoters and the media to Vincy Mas.