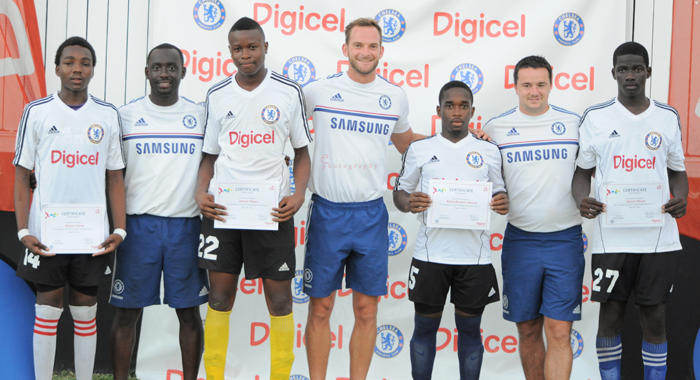 Three local footballers, Jahvan Peters, Azara Browne-Dennie, and Derron Rouse, have been selected to spend a week at the Digicel Chelsea Academy in Barbados in October.

Another youngster, Kewon Clarke, has also made the shortlist as a wildcard and can earn a place at the academy through a voting process that will take place on social media at the end of June.

The four boys were among a group of 30 youngsters vying for the spots after being chosen to take part in the local Chelsea clinic through local clinics set up by the St. Vincent and the Grenadines Football federation.

Monk, the leader of the delegation, said Peters, a goalkeeper, was excellent in the air, had good distribution and was a good leader from the back.

“We need people who are going to be utility players and can play in more than one position.

He said Derron who is very athletic, a very fast player, has great technical ability, kicks with both and can play on any side as a defender.

“He also has a good size and athletic built,” Monk said.

“Marcus is strong and has a low centre of gravity, he controls the pace of the game and is a good centre midfielder than can also play right back, left back, centre back or centre midfield. He is very calm and composed,” Monk said.

He said he is hoping that the athlete can make it to the academy when the wildcard process is completed.

The local players will join over 30 other players from Jamaica, Trinidad, Bermuda, Cayman Islands, Haiti, Suriname, Grenada, St. Kitts, and St. Lucia for the session in Barbados that will take place the week of Oct. 26.