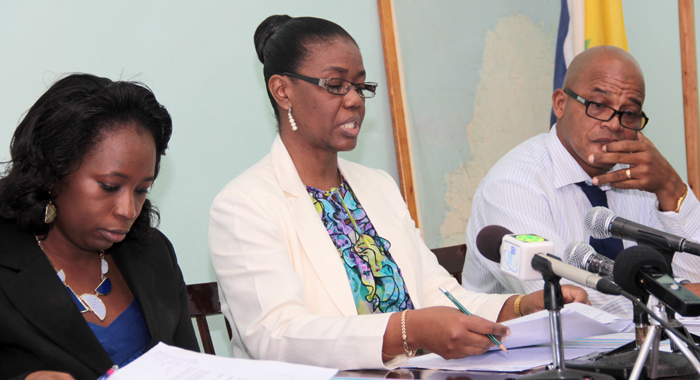 A school for children with special needs was among the 10 schools that recorded 100 per cent passes in the Caribbean Primary Exit Assessment (CPEA) in St. Vincent and the Grenadines.

But while 29 schools performed above the national average of 306.02 marks out of 500, two schools fell below the 50 per pass rate.

“It means that the majority of schools would have scored in and around that region — the 300 and something region — or just below that,” Bernadette Greaves, senior education officer with responsibility of examination and assessment, said at a press conference on Monday.

The Ministry did not indicate how many students from each of these schools wrote the exam, but noted whether two or 200 students, once they all pass, it is still a 100 per cent pass rate.

Six of the schools are private schools, which tend to have smaller populations.

Greaves said only one school had an average below 250 marks, and added that this  “is really commendable”.

“So the schools have really performed well for the CPEA,” Greaves said, adding that education officials are still analysing the statistics.

Chief Education Officer Lou-Anne Gilchrist did not name the two schools that had a pass rate of less than 50 per cent.

“I would rather not call any names. I would answer this by telling you that those schools will receive focused attention. The data will inform our strategies for support,” she said.

“We want the schools which did not make the average to feel as valued as the other schools who were named. We do not want to name and shame, because for us, it is not a shaming process. It is a process in which we will, as I said earlier, examine those school, talk to the teachers, talk to the heads, maybe the parents and some teachers, and find out the causes for their poor performance,” she further said.

The CPEA, which is administered by the Caribbean Examination Council (CXC), is an assessment of the key literacies (mathematical, language, scientific and civic) required by students exiting the primary school system.

The assessment has replaced the Common Entrance Examination (CEE), which has been criticised as a do or die examination that puts too much pressure on Grade 6 students.

Gilchrist said the major difference between the CEE and the CPEA is that the CEE was summative, with students assessed at the end of the teaching.

The CPEA has a school-based assessment that is graded by teachers and monitored by education officers.

She, however, said that in some cases teachers can be too lenient or too harsh in their grading and the ministry will work on standardising school test and grading.

Gilchrist urged teachers to be faithful to the marking scheme sent by CXC.

Meanwhile, Clyde Fitzpatrick of the Curriculum Department, which is monitoring the implementation of the CPEA, said that one of the good things coming out of the assessment is that about 80 per cent of schools have decided that it has to be a whole-school approach.

“I am happy for that because initially, once you say Common Entrance, people pointed straight to Grade 6 and we develope a lot of problems there because some of the things that weren’t taught at the lower level, we are now fighting, struggling to get them in.”

He further said the data show that there is a high correlation between teachers forecast of students performance and their actual performance in the examination.