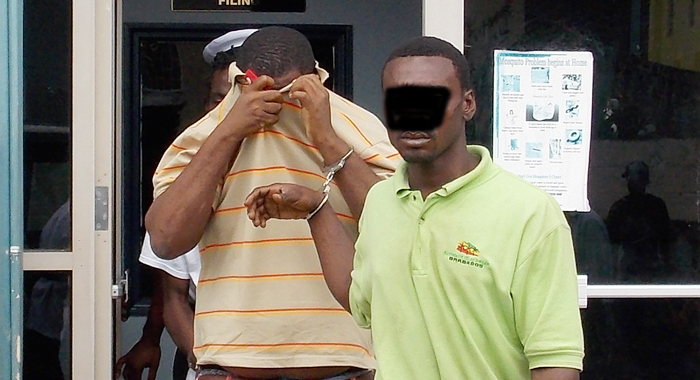 Alister “Tombstone” Smith uses his t-shirt to hide his face as he and another accused man is escorted from court on Monday.

Thirty-six year old New Adelphi resident Alister Smith, popularly known as “Tombstone”, was remanded into custody Monday when he appeared before the Kingstown Magistrate Court and pleaded not to 14 charges of deception.

Smith, a former Sion Hill resident, is accused of dishonestly obtaining by deception over $7,000 in cash and $1,000 in Digicel credit over a 10-day period — June 15 to 25 — from vendor Reynold Quashie of Buccament.

Smith pleaded not guilty to all charges.

The prosecution, led by Assistant Superintendent of Police Glenford Greg, objected to bail on the ground that the Criminal Investigations Department and the Biabou police were investigating other crimes in which Smith may be able to assist them.

Greg said the prosecution feared that if granted bail Smith would hamper investigations.

Smith’s lawyer, Israel Bruce, said bail is of right and there were some pre-conditions which the court could apply its mind to.

He said the issue of bail must be centred on what is before the court and not on speculation that his client may be of assistance to the police in other investigations and that he could hamper investigations.

He contended further that the prosecution did not advance that his client would interfere with witnesses.

Smith was remanded into custody.

He is to reappear in court on Aug. 18 for the start of his trial.

Smith was released from prison less than a year ago after serving sentences for crimes of deception dating back to the early 2000s.