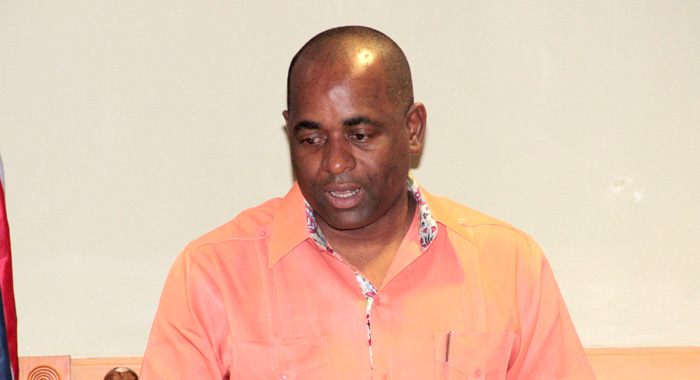 Dominica Prime Minister, Roosevelt Skerrit, took over the chairmanship of the OECS on Saturday. (IWN photo)

Youth unemployment, availability of potable water, and tertiary healthcare have been identified as important areas for attention within the Organisation of Eastern Caribbean States (OECS).

Dominica Prime Minister, Roosevelt Skerrit, who took over the chairmanship of the OECS on Saturday, said the 59th meeting of the sub-regional group came at “a very challenging and interesting time” for the nine-member bloc.

Every country in the region is experiencing numerous challenges, some of which are similar in nature, he said, adding that they include unemployment, particularly among young people, including university graduates.

“Every single government in the OECS has implemented various forms of policies to seek to overcome the challenge. But I believe that we should be able to find a regional approach to deal with this vexing issue of unemployment among our young people,” Skerrit said.

“So I put it to our colleagues that during the course of this week and this year, we need to focus more heavily on the issues confronting young people in our region,” he further said.

Skerrit said he would table for future discussion the issue of the availability of potable water, especially during times of extreme weather.

“I think we need, from a regional project standpoint, … to look at our countries in terms of our ability to supply our citizens with a reliable source of potable water. And areas where we may have a deficiency, can we not get this from sister countries and address the question of transportation and storage,” Skerrit said.

He said Dominica can export millions of gallons of water every day and each of its ports has the facilities to supply any size vessel.

Skerrit further said that under his chairmanship, the strategic direction of the OECS and the strengthening of the OECS Assembly will be discussed.

“We have the assembly, it is an important element of our democracy, our discussion, our sharing of information, our debating of issues. And the recommendation is that we should set fixed dates to hold this assembly so that we do not find ourselves in the manner in which CARICOM found itself, when it set up its own assembly, it died,” Skerrit said.

“We have to protect and guard those institution that we can retain,” he told his colleagues.

The OECS chair also called on the OECS to find a regional approach to healthcare, saying tertiary healthcare is prohibitive to too many citizens.

“Gone are the days when doctors will threat you then ask you to pay,” he said.

Skerrit noted that while many OECS citizens have to travel outside of the sub-region to receive tertiary health treatment, many of them can ill afford to do so.

“I believe we need to discuss what we are doing from a national standpoint and see whether we can develop an OECS approach toward addressing this real challenge,” he said, noting that the incidences of chronic non-communicable disease in the sub-region are increasing.

“All of these are placing pressure on our financial resources, because, in most cases, the government has to fund the medical bill for our citizens,” he said.