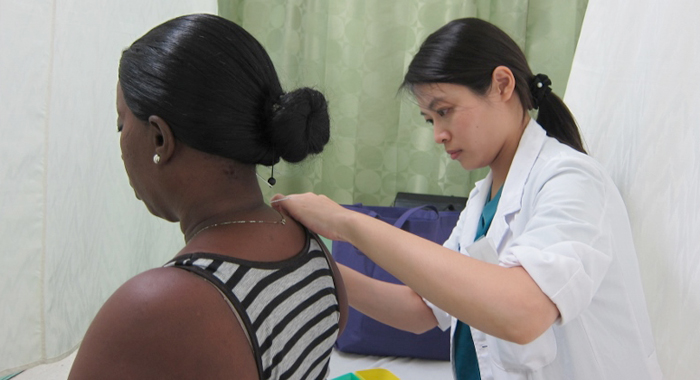 A Taiwanese professional provides healthcare to a woman in St. Vincent.

A six-member medical team from Chunghua Christian Hospital (CCH) in Taiwan is visiting St. Vincent and Grenadines from Nov. 17 to Dec. 5, the sixth visit of the CCH Medical Team to SVG since 2010.

During the visit, the CCH Medical Team is working hand-in-hand with their counterparts at Milton Cato Memorial Hospital (MCMH) in providing medical services to Vincentians, including outreach to clinics in Calliaqua, Georgetown, Barrouallie, Stubbs, Richland Park, and Mesopotamia.

They praised the passion and noble spirit of the CHH team in promoting the health of Vincentians, saying it highlights the cordial relations and friendship between the two countries.

Governor General Sir Frederick Ballantyne expressed appreciation for the medical team’s volunteer medical service, when the team had an audience with him on Thursday.

At a welcome dinner hosted by Taiwan Ambassador Baushuan Ger, Minister of Health Clayton Burgin lauded the government of Taiwan and CCH’s continued efforts to provide medical assistance to SVG.

The medial team is the second from CCH to visit St. Vincent this year.

The first visited from May 18 to June 6. The government of Taiwan supported both missions.

The CCH and MCMH were twined in August 2010, turning on a new page for the medical cooperation between Taiwan and SVG.