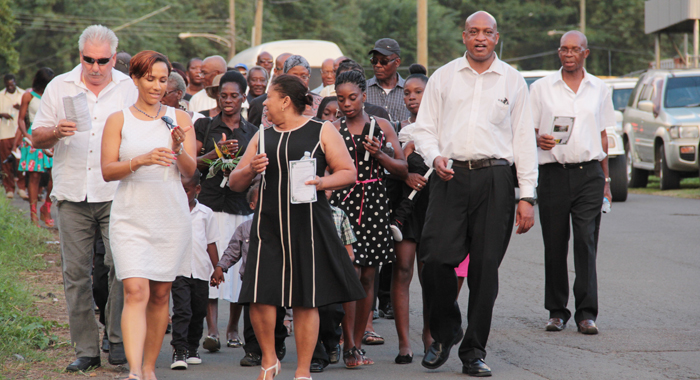 As Vincentian on Wednesday — Christmas Eve — observed the first anniversary of the devastating floods and landslides that claimed a suspected 12 lives and left extensive damage to infrastructure, a pastor urged the nation not to allow one negative experience to cause them to forget their blessings.

The admonition came from Pastor George Frederick as he delivered the sermon at a national memorial service in Pembroke, a community neighbouring Buccament, where three persons died, and three a missing after last year’s trough system.

Nine persons have been confirmed dead and three are missing and presumed dead as a result of the trough system that dumped 12 inches of rain on St. Vincent within three hours on Christmas Eve 2013.

In addition to the lives lost, the extreme weather triggered flash floods and landslides across the country, and left damage and loss to housing, public infrastructure, agriculture and forestry amounting to EC$300 million, according to government figures, and EC$270 million, according to World Bank assessment.

Frederick, in his sermon, “Lessons from the Classroom of Life”, which was based on Mark 13:28-37, reference a book, “Thinking Fast and Slow”, in which the author posits that people have two selves: the memory self and the experience self.

“Folks, here’s what happens. We live in a beautiful country, God has blessed this country abundantly, but flies get into the ointment; [Hurricane] Tomas visits us, flash floods in Georgetown and what transpired last Christmas Eve,” he said in reference to some of the natural disasters that have impacted the country over the past few years.

“Now, are there more such things lurking in ambush? I do not know. But the point is, life, generally, is wonderful,” Frederick said as he urged the congregation and radio audiences not to allow the transient things to take precedence in their lives.

In explaining the purpose of the service, Pastor Sydney Daniel said that whatever the experiences of Vincentians on Christmas Eve 2013, they were all united by one common element: the death of 12 of their compatriots.

“If the people of Retreat, Hope, Cane Grove, Buccament Bay, Spring Village, Rose Bank, Chateaubeliar, Manning Village in Byera, Sandy Bay, Owia, or wherever, were asked to give a report on what they saw and what they heard on the 24th of December, 2013, each person, in their own way, would use different adjectives to describe the scene,” Daniel said, mentioning some of the communities worst affected by the extreme weather.

“Each person would have a different version of what they saw and what they heard. At the end of their report, one thing I am sure of that each would say, at the end of the day, when the waters was cleared and the sea stopped roaring, 12 persons died, three of whom are still unaccounted for,” Daniel said.

“We thank God for their lives and for their service and whatever contribution they would have made during their lifetime to humanity and to this, their land of birth, St. Vincent and the Grenadines,” the pastor added.

“For those who have sustained damage and are badly scarred from the wounds they would have received, for those who would have lost material things and are still trying to put pieces together, we want to assure you that we, as a people, and as a nation, are with you.

“May God’s guiding hands and his providential care be with you and be with us as a nation,” he said.

Among the persons attending the service was Patricia Browne, mother of Jozel Morgan-Small, a 27-year-old chef who was washed out to sea as she and co-workers attempted to cross a flooding road on their way home from Buccament Bay Resort, on St. Vincent’s southwestern coast.

Morgan-Small’s husband, Ricky Small, who also attended the service, used tissue to wipe his tears as Maxwell Charles, minister of national reconciliation and MP for Central Leeward, where two lives were lost and three persons remain missing, read the names of the dead and missing.

The worshippers also included Hazel-Ann Jack, whose 12-year-old daughter, Inka Jack, was washed away also in Buccament Bay, as the two vacated their flooding home.

Inka, who has not been seen since, is also listed among the missing, and presumed dead.

Conrad Jack, whose girlfriend, Shiela Edwards, 36, of Buccament Bay, was washed away and never recovered, also attended the service, along with members of the Nanton family of Rose Bank, who lost five members of their family when their house collapsed under the weight of a landslide.

Gonsalves told the service that there is an individual and collective memory after the events of Christmas Eve 2013, “but it is beautiful and joyous amidst all the pain, because there’s a rock”…

He noted that Nolisha Miller, who lost her mother, Hazel Baptiste, 48, and grandparents, Horna and Walsy Nanton, 70 and 75 years old, when the house collapsed in Rose Bank, has since given birth to her first child.

“God is good to us,” the prime minister said.

Desmond Wilson, 47, of Vermont died after being swept away by floodwaters in the interior community, and Keslia James, 18, and her 2-year-old niece, Shalarni Headley of Canada/Cane Grove, died in Cane Grove while fleeing their flooding house.

Gonsalves told the congregation that in remembering last year’s events, they should also remember those who lost their lives in other weather events in the past.

“We have to remember individual contractor and owners of heavy-duty equipment who came out without any consideration of profit. We have to remember healing providing to us by our religious leaders and our worship in our respective churches. And then, the relief — those who have helped us in our relief efforts and those who have assisted us thus far in our recovery,” Gonsalves said and listed the many countries that assisted after the disaster.

He noted also the individual contributions of “those who are wealthy and not so wealthy”, including thousands of Vincentians at home and abroad.

“We have to remember them and thank them, and be grateful for all of this solidarity,” Gonsalves said, mentioning also the efforts of public servants.

Gonsalves said that the nation has provided relief to thousands of persons after the disaster.

“We have provided housing material to thousands. We have built/re-built substantially about 160-165 homes,” he said.

He said a house is being built for Joy Gonsalves, widow of Raymond Gonsalves, 62, one of the Prime Minister’s cousins who died when a landslide struck his house in Manning Village, Byera during the Christmas Eve disaster.

“And we are doing the roads and the bridges. With God’s help, we will accomplish that…” he said in reference to the 28 bridges that were either damaged or destroyed by the extreme weather.

“There is still a lot of pain and suffering. There’s lots of physiological anguish remaining, and there are many churches which recognise this.

“The Seventh-Day Adventist Church, for instance, has sent down a team for us from their university to work with us and to train others. There are other churches that have done that. And when we are remembering, we have to remember all of those and say thanks to them, and most of all, to Almighty God.

“When you think of it, and when the historian write it, you can imagine people going to sleep or up cooking or baking, and in three hours, their lives were turned upside down. Just three hours, over 300 millilitres of rain fell — over 12 inches in just three hours,” Gonsalves said, noting that just over 20 inches of rain fell between January and May of this year.

“But in those three hours, over 12 inches fell. It’s almost too painful to recall,” Gonsalves said.

“I want to ask, as part of the remembrance, and part of where we are going forward, those who are dead, I know we are still emotional about it, but we can’t help them. They are dead. But we can’t have a remembrance which is just formalistic — that we do it here in this nice church, and beautiful music, and good preaching and praying, we have to show our faith in deeds, because it is in good deeds that faith is made perfect, made complete.