Concert in Fancy on Sunday — 40 days after Rock Gutter tragedy 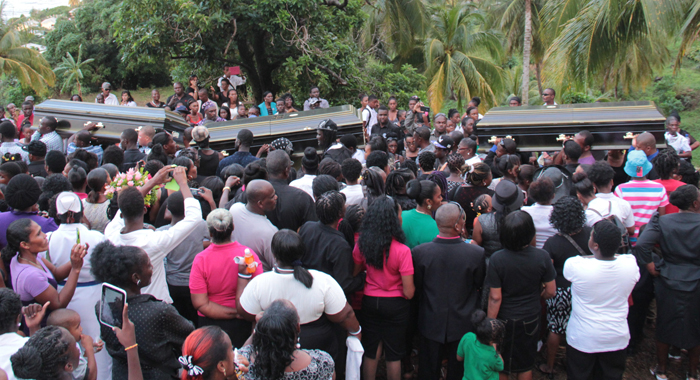 Seven students died when a minibus plunged into the sea at Rock Gutter on Jan. 12 . (IWN photo)

The Pan Against Crime Committee will join with the Association of Artists, Writers and Producers to stage a gospel concert in Fancy on Sunday to show solidarity, love and support for the survivors of the Rock Gutter incident as well as the relatives and friends of the seven students who died when a minivan plunged into the sea on Jan. 12.

The concert will be the first in a series of activities to mark the seventh anniversary of the Pan Against Crime Programme.

Sunday, Feb. 22, is also the 40th day since the Rock Gutter tragedy.

Slated to make performances at the concert are the Police Band, South East Steel Orchestra, La Gracia Dancers, the Prime Minister’s Office Choir, Jewel Cordice, representatives of churches in the area, and the Police Youth Clubs.

Ministers of the gospel in the area will deliver short exhortations.

In the aftermath of the December 2013 flash floods that claimed the lives of 12 persons across St. Vincent and the Grenadines, the Pan Against Crime Committee join with the Association of Artists, Writers and Producers to stage gospel concerts similar to the one that will be held in Fancy.

The Pan Against Crime anniversary concert will be held on March 7 in Rose Bank.

The Pan Against Crime Programme, the brainchild of Prime Minister Ralph Gonsalves, was implemented in several schools and community organisations across the country on Feb. 20, 2008.

The initiative takes a unique approach to fighting crime — helping young people in the country turn to music by learning to play the steel pan.