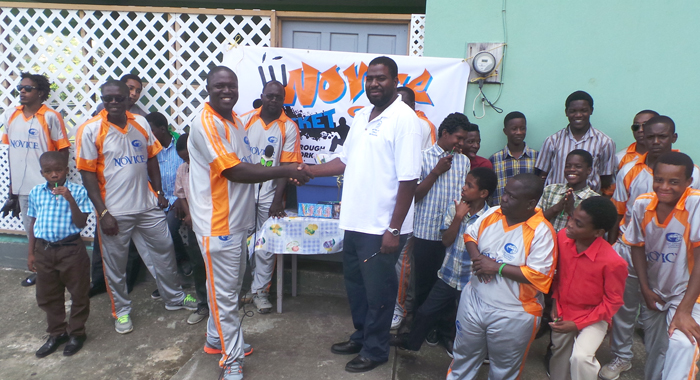 One of this country’s top softball teams has assisted  residents of the Liberty Lodge Boys Home with the donation of  school supplies and toiletries.

The presentation was made on Sunday at the Dauphine Cricket Ground. Renrick Williams made the presentation on behalf of the club and its sponsors Gallagher Insurances to House Master at the Liberty Lodge Boys Institution, Eldon John.

“We wanted to help an organisation, and after looking at a few, we chose these guys because we know that most of them are abandoned by families, parents migrated, [or are] dead …,” Williams told members media personnel at the event.

The Liberty Lodge Boys Home, which was established in the 1960s, is home to a number of boys who have suffered abuse or been “thrown out” by families.

Currently, the population includes boys from 8 years to 16 who, provided some insight as to the reason why they have been put in the institution.

And another: I use to steal and go away from home, fight plenty too.”

The Home is used to teach the boys a skill while using various methods to improve their discipline and self-esteem.

But even as the presentation was taking place there were sporadic incidents of pushing, tugging, elbowing and stomping.

John said that the school faces many challenges but is trying its best to carry out its responsibilities and functions under the circumstances.

He expressed his gratitude to CGM Gallagher Novice and urged other entities to join the Club and provide some level of assistance to the Liberty Lodge Boys Home.

CGM Novice, a team from the West St. George area, play in a number of softball tournaments across the island and have reaped a great amount of success with the lucrative price monies it has won in these competitions.

They are the defending champions in the SVG Police Co-operative Credit Union Clinchers T20 tournament being played at the Richland Park Oval.

Williams said that the club will make other efforts to assist the young boys and other such institutions since they see this as a way of positively impacting the lives of less fortunate young people.