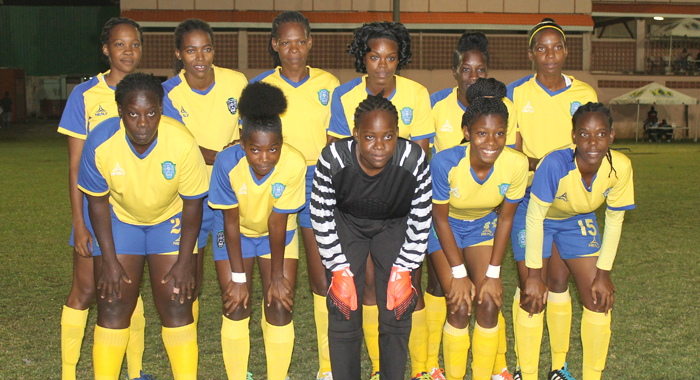 The Victoria Park, with its distinguished past matrimony with history, on Tuesday evening, April 7, 2015 gracefully slid into the annals for yet another time with hosting of the inaugural Windward Islands Women’s Football Tournament.

The historical event saw the female teams from the four Windward Islands — Dominica, Grenada, St. Lucia and host St. Vincent and the Grenadines — in attendance for a sport and in clothing that Queen Victoria would have frowned upon.

But with many of the players just about 18 years old, the age at which she took over the throne, the lady known as the ‘Grandmother of Europe” for mothering nine children, may will have added a further two to enter her own team into the competition.

And 47 days before what would have been Queen Victoria’s 196th birthday, the Park, which was named after her and replaced the King George V Park named after her great uncle, played homage to what is said to be the future of football –the women’s game.

President of the Windward Islands Football Association (WIFA), Venold Coombs, not one to allow history to be noted, made it known that he was instrumental in resuscitation of Windwards Islands Football.

“Fifteen years ago, president [of FIFA], Sepp Blatter, said that the future of football is feminine, and we are here to support that call with this tournament”.

Coombs also said that even more history will be made with the introduction of an U15 Windwards tournament, scheduled to be played also at the Victoria Park.

Chairperson of the Windward Islands Women’s Football Committee, Yolande London, was also happy with the opening of the female tournament and expressed hope that each country will increase the effort to spread and develop female football. She however sees no immediate need for there to be a synchronisation of the development plan, since according to her, FIFA expects them to do their separate programme. London, who is also the SVGFF point person for Women’s Football, having attended a number of FIFA sessions on this subject, was reluctant to discuss any technical matter or recommendations on what is possible for the movement of the game forward.

She indicated that such matters are “better handled” by technical director, Keith Ollivierre.

In the opening match, St. Lucia and Grenada drew 2-2 draw in front of a gathering of spectators.

St. Lucia started brightly with captain Ellaisa Marquis converting directly from a corner kick within the first five minutes of the contest.

But Grenada replied late in the half, and then went ahead on the stroke of halftime.

In the second half, winger Shamalyn Albert surged into the box and was up-ended, earning a penalty. Marquis converted the spot kick and the game ended in a stalemate.

And then SVG, through brilliant team goal, edged out Dominica 1-0 to top of the table despite missing a penalty.

The goal was scored by Kandice Franklyn who finished beautifully after her team was able to string a serious of passes together in the final third of the field.

A few minutes before that, SVG missed a golden opportunity to take the lead when they won a penalty but Shadel Cyrus hit her shot just wide.