Plane crash survivors being kept in hospital for observation (+Video) 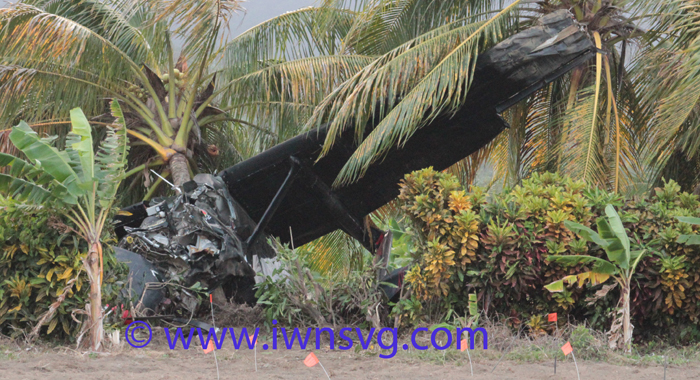 The two occupants survived the crash of the Cessna C-337 Skymaster. (IWN photo)

Health professionals at Milton Cato Memorial Hospital were Monday night keeping in hospital for observation two men who survived the crash of a light aircraft in Georgetown earlier that day.

Police have identified the men, the only occupants of the aircraft, as pilot Wayne Mc Diarmed of St. Lucia and co-pilot Marvin Fabian Peka of Grenada.

They were initially taken to the Georgetown Hospital before being transferred to MCMH, the nation’s main health care facility.

The crash occurred between 2:30 p.m. and 3 p.m., near the Rabacca airstrip, a grass surface airstrip used by the aircraft that sprays bananas across St. Vincent.

Director of the National Emergency Management Organisation, Howie Prince, told I-Witness News separately Monday night that the “jury is still out” on the circumstances surrounding the crash.

“Nobody has been able to interview the pilot as to what was the situation that caused him to be where he was at that particular time,” Prince said.

“I am not privy to that kind of technical information — not at this time,” said Prince, who explained that he had just left the crash scene.

He said that like in all air crashes in St. Vincent and the Grenadines, there will be a thorough investigation by the Eastern Caribbean Civil Aviation Authority.

“They will take over the crash scene, do an investigation, and then they will make their investigation available to the airport authority and the government of St. Vincent.

“I know that they should have been on the ground at some point this afternoon … In the meantime, the Royal St. Vincent and the Grenadines Police Force is in charge of securing the perimeters … so that there is no contaminating,” Prince told I-Witness News.

The aircraft crashed onto farmlands in the Rabacca area, and residents told reporters that they heard strange noises coming from the aircraft before it crashed.

Among the first to arrive on the scene after the crash was Leon Yearwood, security officer at the Langley Park Airstrip.

He said the plane seemed to have been gliding after losing power. It later clipped the top of some trees before crashing into coconut palms on a nearby farm.

“The wind was very high … and at one point I just hear the aircraft lose power,” he told reporters.

He said that after the plane crashed, he called the pilot of the spray plane and grabbed a fire extinguisher and rushed to the crash site.

Yearwood said that when he arrived on the scene he heard someone crying for help.

He said the aircraft was also leaking fuel, so he bent the fuel pipeline in an effort to stem that flow.

A resident who assisted in the rescue effort, said that one of the men were trapped inside the plane.

“The people of the really tried to assist and did a good job in saving the guy’s life,” said the man who declined to give his name.

“He was bleeding a little in the back of his head and when the guys hold him up, he was saying his back cause he was in a leaning position,” the resident told I-Witness News, adding that one of the men had been freed by that time.

“He wasn’t panicking in any way. You could see he was feeling pain and everybody was saying, ‘You are alive; you are good’,” he told I-Witness News.

“People came with rope and tried to assist,” the man said, adding that the aircraft was leaking fuel and the pilot of the spray plane used soap to stop the leak

“At the end of the day, we all took the guy out alive, so that is a plus for the people in the community and around the community,” he said.