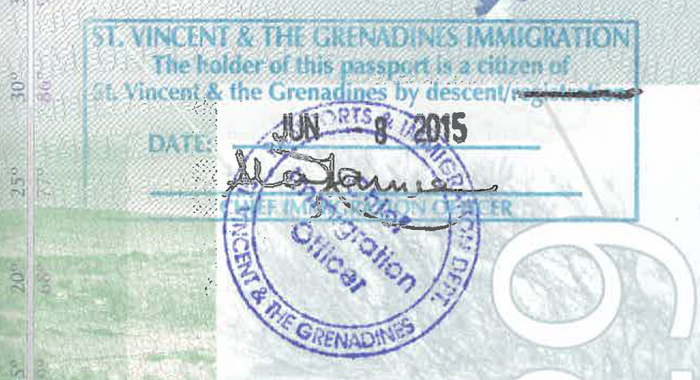 Garvin James’ British passport contains stamps proving that the his a Vincentian citizen.

vinThe St. Vincent and the Grenadines Football Federation (SVGFF) is quietly confident that a protest lodged to FIFA by the Guyana Football Federation (GFF) over the eligibility of a Vincentian team member in the recent CONCACAF Zone 2018 World Cup Qualifiers will come to nothing.

The Guyana Chronicle reported on Friday that the GFF had confirmed “that they have launched a protest to FIFA after realising that St Vincent and Grenadines fielded a player who was not the holder of a passport from the Island”.

This decision by the GFF has been met with shock by the SVGFF who said that their Guyanese counterparts “would be caught offside” with their protest.

The Vincentian team, “Vincy Heat”, and the “Golden Jaguars” played to a pulsating 4-4 draw at the Guyana National Stadium last Sunday, but the home team were eliminated from the 2018 World Cup Qualifiers as the Vincentians had the superior goal difference, owing to the “away goals” rule.

After the loss, the publication said it was made to understand that the GFF had gotten a tip that Garvin James, the SVG striker, was used though he was not a holder of a Vincentian passport, which is a clear violation of FIFA’s laws that govern a player’s eligibility to represent his country.

James was born in England and plays for the Flackwell Heath Football Club.

“Yes, we did write to FIFA, telling them of our findings and protested the result. As far as I’m aware, we haven’t received a response as yet,” the paper quotes the GFF’s Marketing and Communications director Rawle Toney as saying.

According to the Guyana Chronicle, Toney, when asked what prompted the GFF to lodge a protest, said, “Well the GFF believes that it has a case based on the rules of FIFA which clearly state that the only identification accepted as a proof of citizenship is a player’s passport. Four of our players had to miss the first leg of the qualifier because they were not citizens of Guyana and only were allowed to play when that happened and their passports were granted.”

An official of the SVGFF, who asked not to be identified at this point, told I-Witness News that they were in fact contacted by FIFA to supply prove that James had met the requirements to allow him to represent Vincy Heat and they had done so and have no fear of the eventual outcome.

The SVGFF pointed IWN to the relevant section, which qualifies James to represent SVG as he did in the match against Guyana.

According to him, Article 6 paragraph graph 1 of the Regulations governing the Application of the FIFA Statues says “A player is eligible to represent more than one association on account of his nationality, may play in an international match of one of these association in addition to having the relevant nationality, he fulfils at least ONE of the following conditions.

“Gavin, based on these, qualifies under both B & C,” the SVGFF spokesman said.

He said that the player, as stated by the GFF, does have a British passport but they seem not to be aware that he has a stamp by local Immigration Authorities saying he “is a citizen of SVG by descent”.

According to the Constitution of St. Vincent and the Grenadines, any person born anywhere in the world to at least one parent who is a born Vincentian, qualifies, at the member of birth, for Vincentian citizenship and to be the holder of a Vincentian passport.

In his letter of application to the SVGFF seeking to represent his country, James wrote: “My name [is] Gavin James and I am a 26 year old semi-professional footballer playing my football in England! I qualify to play for St. Vincent as both my mum and dad and all 4 grandparents were born there!”

FIFA regulations for the 2018 programme say that only passports are “valid proof of a player’s identity and nationality.” Each player’s passport must be shown to FIFA’s match delegate the day before kickoff.

“The passport was handed to the Match Commissioner on June 8th, two days before the match of June 10th as stipulated by FIFA regulations and we were told that everything was in order. So we are not unduly worried by the claims of the GFF,” the SVGFF official told I-Witness News.

“They are within their rights to pursue any avenue open to them to contest matters that they perceive not to be above board and especially going out the way they did, but I say to them that their claim and subsequent protest are wide of the mark”.

The official said that they are going about with preparations for the next phase of the competition even as they await news of who their opponents would be then.

He also said that FIFA’s response is not expected before Monday and reiterated that the SVGFF is confident that they have not violated any of the regulations.

History has shown that based on similar situations that if the GFF are successful, the result will be reversed, a fine will be imposed on the SVGFF and the “Golden Jaguars” will be awarded the victory with a 3-0 shoreline and would advance to the next round of the Qualifiers.

In 2000 the SVGFF called up Aston Villa’s Julian Joachim to play in the World Cup Preliminaries but after arriving in SVG, the player who had qualified through his grandparents, was deemed ineligible because he had represented England at the U21 level nine times.