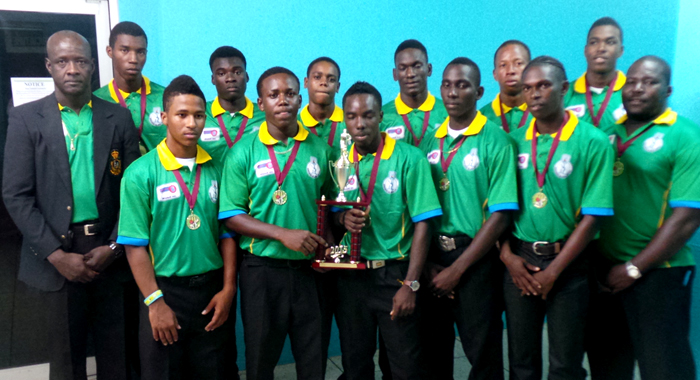 St. Vincent and the Grenadines Under 19 cricketers returned home on the night of the Soca Monarch show with the Windward Islands title in their possession following a seven-year wait.

The SVG team last won the title in 2008 and for the last few years have failed to get a lien on the coveted piece of silverware owing to poor play, bad umpire decisions or dicey weather.

Reports say that the team under the leadership of Romano Pierre encountered those three situations but were able to weather the storm with some timely performances.

The SVG team recorded three wins, had two no-results and lost one match on their way to winning the title.

Coach of the team Orlanzo Jackson said the team played as a unit and this helped them out of some tight situations.

He said that in the first match they only made 89 but were able to dismiss Dominica for 83 in the final over.

Going into the final, SVG were second with the home team, Dominica.

SVG were dismissed for 133 in 27 overs but got back to dismiss St. Lucia for 124 and with Grenada beating Dominica, SVG claimed the title.

The coach said that the standard of the tournament was very high with the pitches also being of a high quality.

He, however, expressed disappointment with the batsmen not capitalising on the good wickets but said this may have been with the format of the 50/50 cricket “where batsmen felt that they had to be always playing attacking shots”.

He was full of praise for Pierre and Othneil Lewis both of whom, along with fast bowler Obed McCoy and Gidron Pope, were named in the Windwards squad.

“Those guys really looked the part while at the wicket and Pierre batted long and always looked comfortable and even though he did not get the runs to reflect that he selectors saw in him a good player,” Jackson said just after 11 p.m. upon arriving at the ET. Joshua Airport.

Pope, who was named captain of the SVG team, did not play in the tournament after being offered a development contract with the St. Lucia Zouks in the current Caribbean Premier League (CPL).

He said that Lewis looked a classy player and was spoken of highly by all who saw him when he got a half-century. Lewis was named SVG’s MVP of the tournament.

On the bowling, both Jackson and manager Parnel Browne were high in praise for left-arm seamer McCoy who picked up 10 wickets and was seen as the quickest bowler in the tournament.

“Everybody was talking about Obed (McCoy) with his pace. In fact many people were saying that he has a bright future and were looking for him in the Windwards team soon. He really bowled with good pace.”

Jackson said he is confident that the team can repeat with possibly six players expected to return for the 2016 tournament. The coach suggested that the SVG Cricket Association look at the possibility of playing the U19 team as a unit in the national competition as a way of preparation and “the players sticking together”.

The team was met on arrival at the ET Joshua by selector Arnold Gilkes — a former Barbados Youth player, who now resides in SVG.

Grenada won the tournament in 2014 after rain affected SVG in a number of crucial matches.