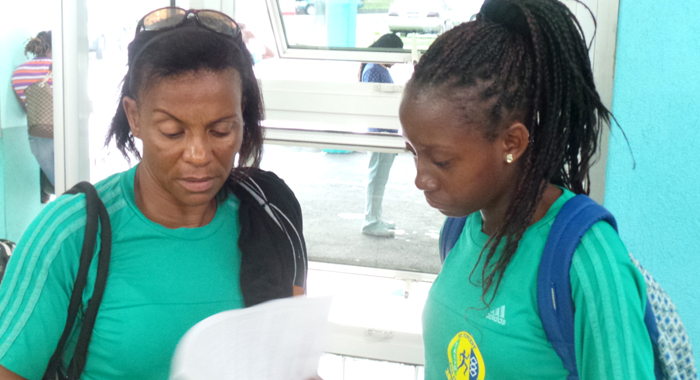 This country’s lone representative to the IAAF World Youth Athletics Games in Colombia, Shantel Williams, will run the Heats in her pet event, the 200 metres, today (Friday) with the intention of making it into the next round of the competition and improving her time in the process.

Williams qualified for the Games after achieving the standard at the Hampton international Games in Trinidad in May.

The standard for the Youth Athletics Games for the 200 metres was set at 25.35 seconds and Williams completed the distance in 25.31 seconds.

Just prior to leaving for the Games on Sunday afternoon, Williams admitted to being a little nervous but said she was confident of doing well.

Her coach, Pamenos Ballantyne, who was not making the trip, said that he is confident that his charge of just under two years has the potential to do well.

Ballantyne, for many years one of the region’s top distance runners outlined the progress that Williams has made since taking up to training with him.

“When she came, to tell you the truth, I was not too motivated to train her because she was running real slow and I could not see her making that level of improvement necessary to be a good athlete.

“She just kept coming every day and I said, ‘You know what? If she is so interested, then let me work with her.’ And we began working together and the improvements you can see for yourself,” he said.

Ballantyne said that when Williams started she was doing 28 seconds for the 200 and that was very slow and at last year’s Inter-Secondary School Games she completed the 200 metres in 27.56 seconds.

Ballantyne said that Williams, who also runs the 400 metres, was not even a part of the GHS 400 metres team last year but was selected in 2015 ahead of others who were on the team the previous year.

Williams said that September will make it two years since she began training with Ballantyne and she has no regret saying that he is a “good coach”.

Ballantyne said that they train almost every day but some days are lighter than others but every day is serious because when it comes to training he is “very serious”.

In his last minute instructions before Williams departed the ET Joshua Airport, Ballantyne advised her to “try and be comfortable” without putting herself under pressure and that at the bend she “must push hard over the next 80 metres”.

“I want to see a good effort with an improvement in your time,” he said.

The Games end on Sunday.