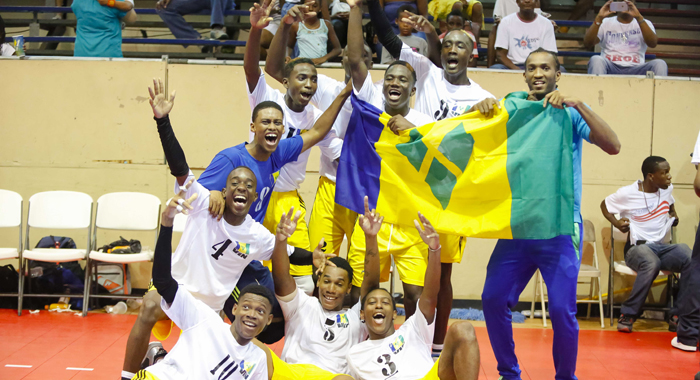 The St. Vincent and the Grenadines Volleyball team react after their victory. (Photo: noceca.net)

PHILLIPSBURG, St. Maarten — Wild celebrations broke out among players, coaches and a handful of supporters when St. Vincent and the Grenadines secured the last point in a 4 set victory (20-25, 25-11, 25 -17 and 25-23) over the defending champs St. Lucia to win the Eastern Caribbean Volleyball Association (ECVA) Junior Male Championship.

St. Vincent had to show real fortitude to comeback from a set down with the momentum going St. Lucia’s way to take a lopsided victory in the 2nd set. In the 4th set, they made up ground on some sizeable leads to secure their 1st ever championship at this level.

St. Vincent and the Grenadines relied heavily on Outside Hitter Ronaldo Franklyn to carry their attack. He did so by topping all scorers with 17 points. This comprised 13 kills and 2 blocks as well as 2 points from the service line. Middle Blocker Marcus Thomas scored 15 points to be the other main contributor to the score.

For St. Lucia’s Middle Blocker Anton Thomas was the one who ended with the most points on that side tallying 9 from his efforts at blocking and serving.

“We are happy, in fact extremely happy, to be taking back home this trophy,” Cassius Franklyn coach of St. Vincent and the Grenadines team said after the victory.

“Our guys were confident going into the game but St. Lucia threw some tactical changes and this cost us the first game,” the coach said.

“However, we were able to pick up our pace and executed according to plan. It must be noted too that the setter made some excellent adjustments to run the team, him along with the captain really brought back some vibes on the court and this translated to positive play and less argument,” Franklyn said.

Meanwhile, his St. Lucian counterpart, Germain Elvin said, “This is a new feeling for us because we usually retain the junior championship.

“However we are not seeing it as a total defeat but instead acceptance that there is another competitor in the pool.”

Elvin said that during the game the St. Lucian team tried at first to slow down the pace as they realize that they were more accustom to a faster pace game.

“It worked for a while but they got the better of us in the second set. We picked up momentum again in the 4th set but during that game we made at error at the 22-23 all and the final point that they got was a defensive error.

“I still think that we have the capability to win but it is just that we made some decisions that cost us the 4th game. Had that not being the case we probably would have taken them in 5,” he said.