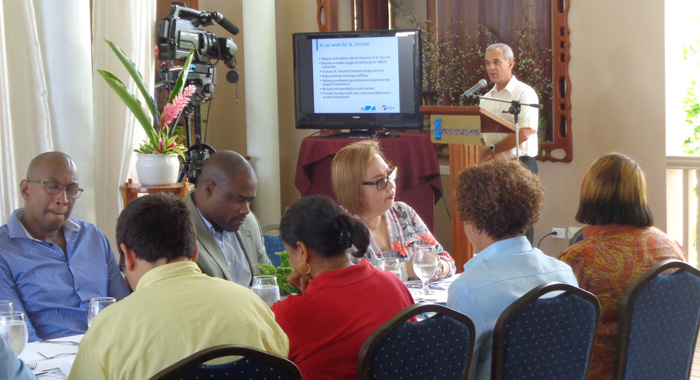 Members of the St. Vincent and the Grenadines (SVG) Chamber of Industry and Commerce (CIC) have been updated on the progress of the country’s geothermal project, which CIC president Christine DaSilva says is “important” and has “a lot of potential” but will take some time to execute.

Peter Williams, managing director of Emera Caribbean, based in Barbados, briefed the Chamber during a luncheon last week.

Williams told the gathering that geothermal energy, while new to St. Vincent, is not new to the world, and noted that Emera has geothermal projects in Japan, Iceland, Indonesia, the Philippines, and the United States.

The geothermal project, in which the government of SVG is an equity shareholder, comes with “a significant amount of capital investment up front,” Williams said.

He said this seeks to offset the “high fuel bill and uncertainty with fuel”.

SVG spends some US$26 million annually on imported diesel for electricity generation.

He said that with the future price of fuel an unknown factor, the geothermal project seeks to bring stable pricing and known operating costs.

The project is into its third year and a geothermal plant is expected to become operational by 2018.

Emera Caribbean is working in close conjunction with VINLEC, which will own and operate transmission interconnection.

As part of the process of identifying a suitable site for geothermal energy, two resistivity campaigns have been carried out to look for the potential energy stored below the earth’s surface.

After several scientific tests and surveys, it was decided that the Windward side of St. Vincent, “just inward of the Orange Hill area”, would be the optimum location for a geothermal power plant.

Reyjavik Geothermal estimates that there are 60 megawatts of power available, out of which a small portion will be extracted.

Drilling to prove those resources will costs US$32 million of the overall US$75 million budget.

It is forecast that three wells will be drilled to deliver a conservative estimate of 5 megawatts of power per well.

Williams explained that Emera Caribbean and Reykjavik Geothermal, in conjunction with VINLEC, will carry out further analysis over the coming months.

The 10- to 15-megawatt project is expected to deliver close to 70 per cent of St. Vincent’s energy needs.

Williams said the remaining 10 per cent will continue to be generated by diesel.

Close to 100 members of the Chamber, as well as government officials, including Ellsworth Dacon, director of the Energy Unit, attended the luncheon.