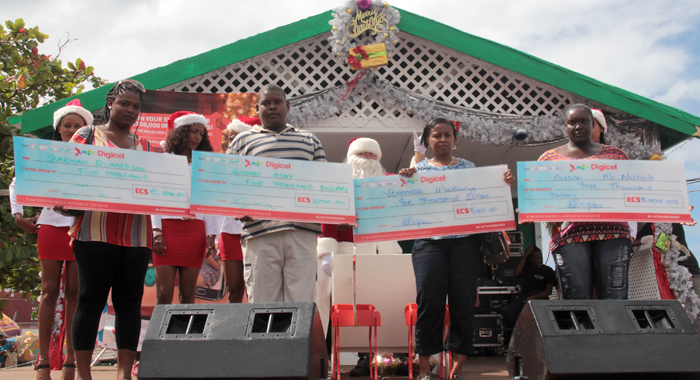 Five persons in St. Vincent and the Grenadines each spent Christmas with 5,000 more reasons to be merry.

The five were winners in the Digicel Christmas promotion.

Four of them were selected during a draw among finalists at Heritage Square on Christmas Eve.

Kenville Innis, the winner of the Text to Win category of the promotion, was drawn from among finalists and presented with his cash at Digicel’s office in Kingstown.

The other four winners were each one of 10 finalists in the Data activation, Top Up $10 or More, Pay Your Post Paid Bill on Time and Join the Digicel Family categories of the competition.

The names of 10 finalists in each category were each placed in a Christmas ball and inserted into a bowl.

Digicel ambassador Lancelot “Mad Skull” Gloster randomly picked the winner of each category during the draw, which was witnessed by Digicel officials, the finalists, the media and members of the public at Heritage Square.