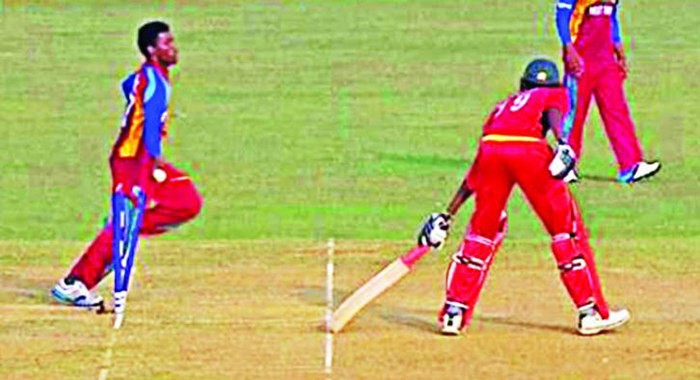 West Indies pacer Keemo Paul, left, “mankading'” Zimbabwe’s Richard Ngarava to steal a two-run win and a place in the quarterfinals of the ICC U-19 World Cup at the Zahur Ahmed Chowdhury Stadium in Chittagong Tuesday. Photo: Internet

Former Windward Islands and Combined Islands offspinner, Stanley Hinds, is in full support of the manner, though controversial, in which the West Indies Under 19 team advanced to the Quarterfinals of the Youth World Cup in Bangladesh

The match ended Tuesday in controversy in the final over of the Zimbabwe innings with them needing 3 runs to win and West Indies requiring 1 wicket.

Pacer Keemo Paul broke the stumps and appealed for a run-out against non-striker Richard Ngarava who was backing up just outside his crease.

Ngarava, whose bat appeared to be on the line as the bails came off, was given out after the umpires referred the situation to video review.

The line belongs to the fielding side.

The method of dismissal, known as “Mankading’” brought swift rebuke from several current and former internationals watching the game.

And some of the responses and reactions were caught by the media with England ODI captain Eoin Morgan describing it as “disgraceful behaviour” and saying the West Indies should be embarrassed.

But Hinds, who is among the few bowlers who have dismissed a batsman by this method, sees nothing wrong with what the bowler did.

“The non-striker, by leaving his crease that early, is gaining an unfair advantage in his effort to make it to the other end and to me that is cheating and because of that the bowler is within his right to stop him,” Hinds said with conviction.

In 1983 in a match against Guyana, Hinds ran out then West Indies captain Clive Lloyd, when he backed up too far.

“I saw him out of his crease and I took off the bails and appealed, the umpire did not want to give him out but I insisted and he raised his finger,” Hinds recalled.

He said that an angry Lloyd accused him of playing “bush cricket” and there was an exchange of words, but, according to him, the batsman had to leave the wicket.

Hinds’ former teammate, Lance John, on Wednesday said that more than 30 years after the event, Lloyd is still seething and reminded him of the incident last year while at a function in St. Vincent and the Grenadines.

Hinds said that batsmen are allowed to take liberties all day without any intervention by the umpire, but as soon as a bowler does such a thing that is in the law, the talk of “spirit of the game” comes up.

Hinds said he had no regrets in the matter with Lloyd and if the opportunity presents itself again, he will do the same thing.

“I was operating within the law and will never make any apology for doing it,” Hinds said emphatically while scoring at a junior cricket match at Arnos Vale.

He said that while it is said that cricket is a ”gentleman’s game” that does not guarantee results.

“In the 1987 World Cup, Courtney Walsh refused to run out the Pakistani batsman who was backing up too far, the West Indies were knocked out at the semi-final stage and Walsh was applauded for his sportsmanship but the record will show that the West Indies lost not what Walsh did”.

And the uncompromising sportsman who played both cricket at the national level said even if he is playing masters cricket and any non-striker tries to gain that advantage he will run him out.

“We are enemies out there (on the field) so I approach it as a war. Yes, when we come off we are friends, but rules are rules and they must be followed.”

West Indies Under-19 captain Shimron Hetmyer admitted the dismissal wasn’t in the spirit of the game but he wasn’t apologetic about the act.

“Cricket is a game of glorious uncertainties. We’ve seen this in cricket before. It’s probably not in the spirit of the game, but we’re happy to have won,” he said after the match.

The first instance of the dismissal was in 1947 when India’s Vinoo Mankad ran out Australia’s Bill Brown at Sydney in the 2nd Test when the batsman left his crease before the ball was delivered. This mode of dismissal was hence named after him. Even though he received criticism from several corners, Australian skipper Donald Bradman reportedly supported Mankad’s actions.

“The Mankad rule, was brought back into the ICC Playing Conditions in 2011. It states: “The bowler is permitted, before releasing the ball and provided he has not completed his usual delivery swing, to attempt to run out the non-striker.”

There have been some eight such dismissals in international cricket.

SVG’s Gidron Pope and Obed McCoy are part of the West Indies squad with Pope being one of the team’s top performers with the bat.

McCoy, who is rated as possibly the team’s quickest bowler, is yet to play a game in the tournament even though he featured in the warm up matches.