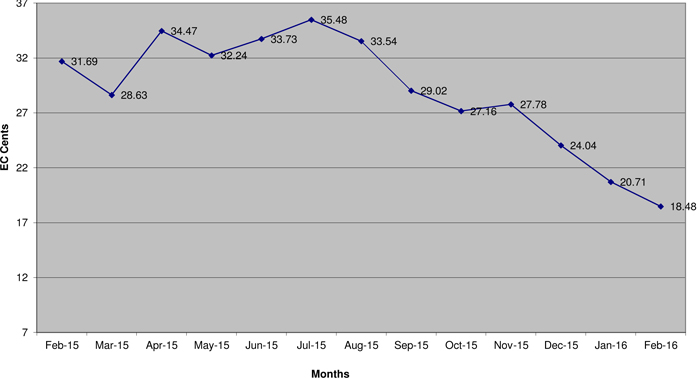 Customers of VINLEC continue to benefit from falling oil prices on the world market.

The company has announced a fuel surcharge rate of 18.48 cents per unit for February, another record low.

This month’s rate represents a decline of 2.23 cents per unit or 11 per cent compared to January 2016.

Additionally, the fuel surcharge rate applicable on bills this month has fallen by 29 per cent from February 2015.

Over the last 16 months, the fuel surcharge on VINLEC’s electricity bills has been on the decline primarily because of the downward trend in fuel prices on the world market.

VINLEC said in a statement on Monday that it wishes to highlight that these savings have been passed on to customers, as reflected on electricity bills.

A similar rate in the range of 18 cents per unit was applied on electricity bills twice in May and June of 2003.

“VINLEC wishes to emphasise that the fuel surcharge rate applied on electricity bills is a reflection of the price of fuel on the international market. The company also wishes to highlight that the Fuel Surcharge Rate varies from month to month, depending on the price of fuel that VINLEC buys to produce electricity,” VINLEC’s said in a statement.

“The Company reiterates the need for customers to be energy efficient despite the Fuel Surcharge Rate. Be reminded that the final bill amount depends on how much energy is utilized,” the statement added.